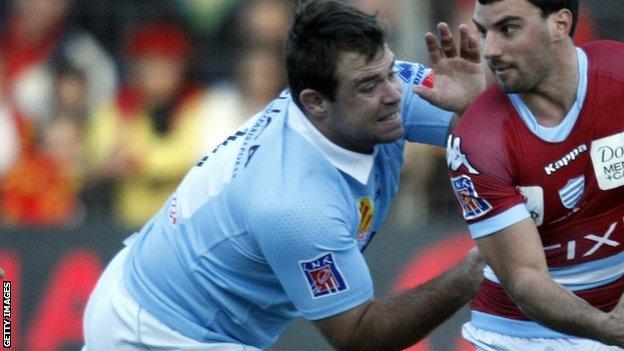 Injury-hit Worcester Warriors have signed tight-head prop Jerome Schuster on a short-term deal until the end of the season from Leicester Tigers.

Warriors were given special Premiership dispensation to sign the 28-year-old French international after being left weakened in the prop department.

Already without John Andress, they have now also lost Jeremy Becasseau, who has undergone surgery on a neck injury.

And Scotland international prop Euan Murray is only just back from injury.

"With the injury to John Andress and the fact that Euan Murray has only recently returned from a lengthy lay-off, it was important to bring in a tight-head prop for the rest of the season," said Warriors director of rugby Dean Ryan.

"There's not a Dan Cole waiting round the corner.

"But I am delighted that we are able to recruit someone of Jerome's experience."

Schuster has made just two appearances for Leicester since signing from French Top 14 side Perpignan, making his Tigers debut at Sixways in their narrow 21-18 LV= Cup victory over Worcester in November.

Until returning for Saturday's 24-12 home Premiership defeat by Sale, Murray, signed from Newcastle in October 2012, had not played in almost three months.

After picking up a knee injury on his 47th appearance for Scotland during the autumn international series, his return was then delayed when he suffered a thumb injury while chopping wood during a team-bonding exercise.

And the 33-year-old Scot lasted only an hour on Saturday as Worcester failed to end their losing Premiership run.

"He hadn't trained all week," Ryan told BBC Hereford & Worcester. "He's a got a disc issue, like most tight-head props, and it shows that it was sorer than normal."

Schuster, Worcester's second signing from Leicester this month following the arrival of stand-off Ryan Lamb, will be available to make his debut this Saturday at Harlequins, when Warriors will mark exactly a year since their last Premiership win.

Worcester will also have skipper Jonathan Thomas available following his one-week ban for striking an opponent in the 30-14 defeat at Northampton a fortnight ago.