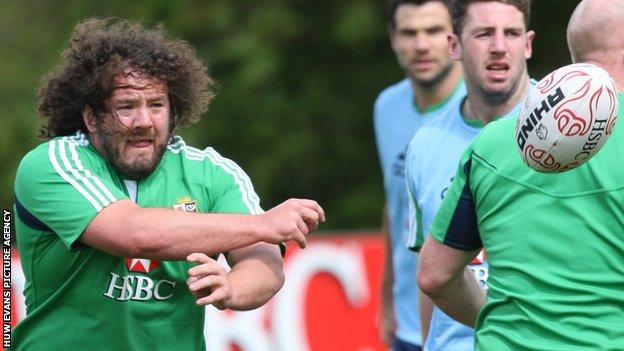 Adam Jones hopes his future will be settled in the coming days and says he is likely to stay in Wales.

The tight-head's contract with Ospreys ends in May, and he is one of six Wales players who have been considered for Welsh Rugby Union national contracts.

Jones has not confirmed who he will be signing for, but he hopes to complete a deal soon.

The 92-times capped prop, who turns 33 in March, said in his BBC Sport column: "I'll probably be staying in Wales."

Amid financial worries and rows over the Welsh domestic game's future, prop Jones is the only leading Wales star not to have yet signed a deal.

However, the British and Irish Lions star hopes to have his future settled soon.

"I will hopefully have everything done this week [in terms of my contract future]," he said.

"But I've been hoping for that for the last month so I'm not going to cross my fingers.

"It's dragging on a bit now. I've got to make sure everything's right, but hopefully this week and touch wood, [it will be] sorted by the weekend.

"[And] yes, I'll probably be staying in Wales."

Jones was one of six players the WRU highlighted, whose contracts were due to expire that they would like to stay in Wales.

Of those, only national captain Sam Warburton has agreed a national contract with the union.

Of the others, Rhys Priestland and Scott Williams have agreed new deals with the Scarlets, and Alun Wyn Jones has opted to stay with Ospreys.

Blues and Wales full-back Leigh Halfpenny is the only one of the six to opt to move away from Wales - having signed a contract to join Toulon for the 2014-15 season.

Earlier in the season the Welsh game witnessed a rush of players opting to leave the domestic game.

Cardiff Blues' Wales lock Bradley Davies, who will not play again this season because of injury, will be at Wasps from next season.

Of the Wales squad that started the 2014 Six Nations seven are already playing outside Wales.