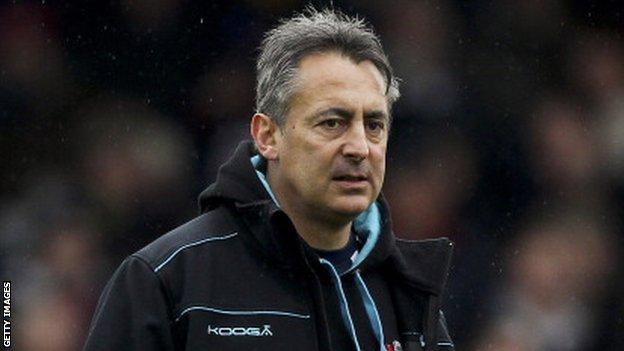 Gloucester boss Nigel Davies was happy with his side's response to the pressure they have been under in their win over play-off-hunting Harlequins.

Saturday's 25-20 victory was just the Cherry and Whites' third at home in the Premiership this season.

"I'm really pleased with this group of players and coaches because there is pressure at the moment," said Davies.

"But we've kept an even keel, we've kept our belief and our focus, and we're playing some rugby."

The win followed a gritty display at Leicester the previous week and director of rugby Davies told BBC Radio Gloucestershire it provided a platform for his ninth-placed side to build momentum.

"That performance, off the back of the performance last week, is important and things can start to change, bit by bit," he said.

"Momentum is everything. We lacked it at the start of the season and we've stuttered and staggered.

"We had to look long and hard at ourselves and go back to the drawing board in some cases. The great thing is we're not hiding away and we're going to come out fighting.

"There aren't many teams under the cosh who carry on playing rugby and that's what we're going to try and do."