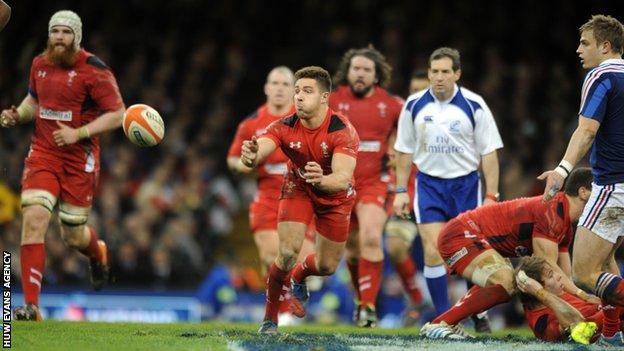 The result put defending champions Wales right back in the title race after a one-sided defeat in Ireland.

"Wales needed something different, they needed a mix, they needed to change it, get the ball away a bit quicker.

"We've got some outstanding backs but we've been a bit static over the last couple of games.

"We depend so much on that front foot going forward. The forwards set up that platform and Rhys Webb got into it.

"But he could still have made a mess of it, he didn't overplay his hand, he got the ball away very swiftly.

"I thought it gave the backs a lot more time, even in a tight situation, and tactically he did exactly what was required of a scrum-half and I thought we all benefited from that."

Gatland had strongly criticised his squad after the defeat in Dublin, but Wales responded with a winning margin that equalled their best performance against France to record a third straight win against Les Bleus - a feat not achieved since 1970-72.

Phillips, 31 and who has 82 Wales and five Lions caps, was consigned to the bench, only getting on in the 70th minute at the Millennium Stadium with the game won.

But despite his approval of Webb's performance, Edwards believes that Phillips still has an important part to play for Wales, who next face a trip to Twickenham on 9 March to take on England, at the weekend.

"Mike hasn't really been at the top of his game and I think he'd be the first to admit that, but he's still formidable."

"Mike's a ninth forward and when the forwards are going well he's really a handful," Davies said.

"Rhys Webb is a different kind of player and they maybe needed to change it a little bit, make it a little bit sharper and that's what he did, and I thought he was very, very good on Friday night."