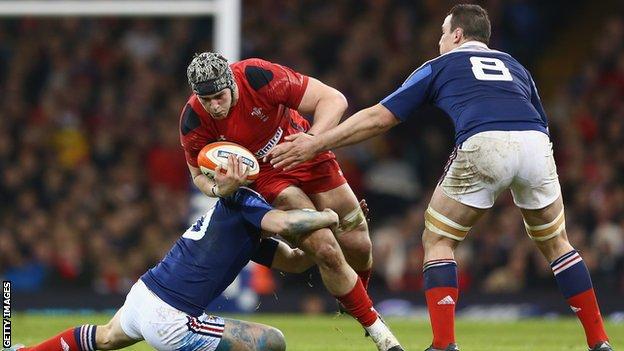 Dan Lydiate says Wales' 27-6 Six Nations win against France proved coach Warren Gatland was right to give his players a chance to redeem themselves.

Gatland had warned after their 26-3 loss in Ireland that some of his squad might be playing their last Test if they underperformed again.

But Wales responded to equal their record winning margin over France and get back into the title race.

"We are just thankful Gats gave us another chance," said flanker Lydiate.

"He did speak to me, and rightly so, and it's not a nice thing to hear off your coach, but Gats has always been honest with his players.

"I would rather be told than talked about and not be told.

"That's the level we are at and I want it to continue that way.

"You want to know where you're at. If you deserve praise you get it, and if you deserve a kick up the backside, you get that as well."

Racing Metro blind-side Lydiate and his back-row colleagues of captain Sam Warburton and number eight Taulupe Faletau had the edge against the France breakaway trio of Yannick Nyanga, Wenceslas Lauret and Louis Picamoles.

Veteran props Adam Jones and Gethin Jenkins - the latter named man of the match - also rose to the occasion after their warnings from Gatland.

"He [Gatland] always has chats with players. He might just pull you to the side and ask how you are feeling. It's not unusual," Lydiate added.

"To be honest, from the final whistle in Dublin we were hurting that bad.

"We let a lot of people down - the public and ourselves.

"It [beating France] was a lot different to two weeks ago. It was just a great feeling.

"We were hurting after the Dublin game, and it was nice to get the result.

"The one thing I've learnt in my career is I never count on anything. I am always nervous for every selection.

"I don't think that will ever change and that's what keeps me and the squad on their toes."

With England edging Ireland 13-10 at Twickenham on Saturday, ending another unbeaten run Wales' title defence is back in their own hands as they prepare to go to Triple Crown-seeking England on Sunday, 9 March.

"It is just one game [the France win], and we have to build on this now going into a big match up at Twickenham," Lydiate added.

"The championship is a massive motivation. We take each game as it comes, but England are playing well at the minute and to go up to Twickenham and get a result would be massive for us.

"Every player has his own reasons for playing the game. There is that history and your families and everything.

"You want to do yourself proud every time you play.

"In Dublin we didn't do that and it's nice to restore that pride back in the jersey."