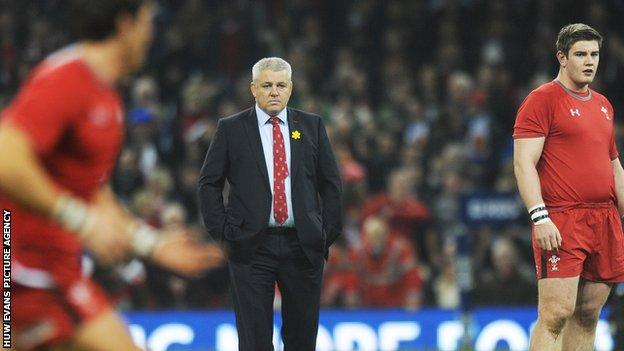 Head coach Gatland was happy with the "fantastic" win, which came after defeat in Ireland two weeks ago.

"We're back in contention," Gatland said. "I am often grumpy with these guys, but I am happy with that."

He added: "The performance against Ireland wasn't good enough. We let ourselves down in Dublin.

"They responded well, with a good performance and a fantastic result.

"The atmosphere was sensational and the players responded brilliantly to the pressure we put on them.

"I'm a great believer in giving players a chance to redeem themselves, and I think that's definitely what happened.

"When you're involved in a game that doesn't go your way, you want the chance to go out there and put things right.

"We have got a big game (against England) at Twickenham in a couple of weeks, but hopefully today will be a platform for that."

Full-back Leigh Halfpenny scored 17 points with the boot, including five penalties and a conversion.

North, making his first start at centre, scored Wales' opening try in the first half and captain Warburton crossed after the break.

Prop Gethin Jenkins, who was man of the match, said: "It has been a tough two weeks and it's good to get a nice win.

"Some harsh words were spoken and we knew we had to deliver. The coaches gave us a kick up the backside.

"Now we are targeting four [wins] out of five [games]."

Warburton, who warned his players before the game that none of them could take their places for granted, said: "That was exactly the response we wanted."