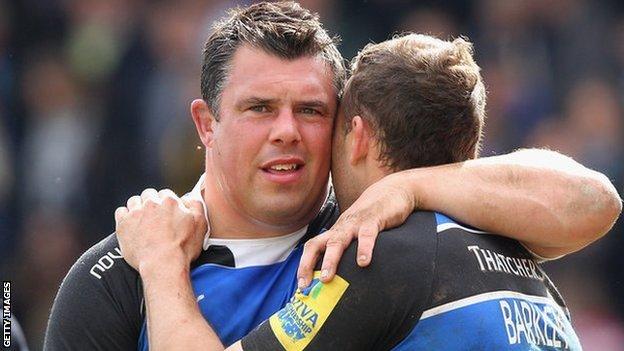 Former England prop Duncan Bell will come out of retirement to face Glasgow Warriors for Newport Gwent Dragons in the Pro12 at Rodney Parade on Sunday.

The 39-year-old last played a professional game with Bath two years ago and is now head coach at Lydney.

But he has responded to Dragons' call for cover after suffering a spate of injuries, illnesses and suspensions.

Warriors also welcome back a prop, with Mike Cusack back in action after 14 months out with a shoulder injury.

I am head coach at Lydney and I do have a responsibility to them, so playing for the Dragons, it may clash

"I am over the moon to be coming back to play rugby," said Bell, whose side lead England's National Three.

"I am only two weeks into my new role at Chartwell, so I am lucky and thankful that my boss has been so accommodating.

"They are keen to not stand in my way but at the same time know that I will be back at work.

"I am head coach there and I do have a responsibility to them, so playing for the Dragons, it may clash.

"But, with the arrangement we have, I am able to still coach the boys and I have a great team manager there in Colin Henderson, who has been instrumental in that."

Bell is in the front row, with captain Andrew Coombs returning to the line-up after being released from the Wales squad, while Lewis Evans moves to number eight.

Full-back Rhys Jones gets his second start of the season in an otherwise unchanged back line.

Douglas has made 43 Scotland appearances and played for Harlequins, now-defunct Borders, Scarlets, Montpellier and Worcester before joining Bristol in 2012.

Cusack returns to action for Glasgow at tight-head in place of Ed Kalman following their 27-20 win away to Cardiff Blues, with Jerry Yanuyanutawa stepping in for Gordon Reid and Dougie Hall starting at hooker in place of the injured Pat MacArthur.

The Dragons have already beaten us at home this season, so we know how big a challenge we face at Rodney Parade

Jonny Gray comes in for Tom Ryder and he will partner Fijian Leone Nakarawa in the second row.

Ruaridh Jackson switches to full-back, allowing fly-half Finn Russell to make only his second start for the club.

Byron McGuigan is fit again and takes over from Rory Hughes on the left wing.

Head coach Gregor Townsend said: "We were really pleased to win down at Cardiff last weekend and there were plenty of positives which we can take into the game.

"The Dragons have already beaten us at home this season, so we know how big a challenge we face at Rodney Parade.

"They are a well-organised team and are tough to play against, they also have a very good home record, having only lost twice since last March, so we know we'll have to play well to come away with a positive result."