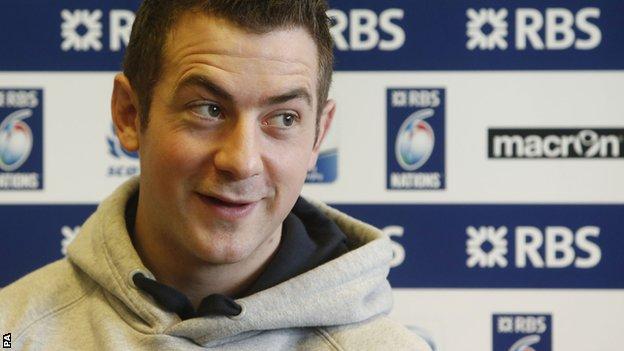 Captain Greig Laidlaw firmly believes Scotland can salvage their Six Nations campaign, despite opening with defeats against Ireland and England.

Scotland face Italy, who have also lost both games so far, in Rome on Saturday.

"It's an absolutely massive game for us. We'll be chucking everything at it to get the win," Laidlaw said.

"We have France at home a couple of weeks after and that's a game we can look forward to with confidence as long as we go well this weekend."

Scotland have not won in Rome since 2006 and both sides are looking for their first points of the tournament, with Italy having lost to Wales and France, while the visitors were outclassed by Ireland and England.

Edinburgh scrum-half Laidlaw is expecting a keenly-contested match, but takes heart from recent clashes with the Azzurri.

He told BBC Scotland: "It's going to be tough but we beat Italy twice last year - in the Six Nations at Murrayfield and down in South Africa in the summer - and the pro teams have gone well against the Italian sides in the RaboDirect, so we'll take confidence from that."

Laidlaw, 28, took up the captaincy for the 20-0 Calcutta Cup defeat when Kelly Brown was dropped after the loss in Dublin.

Flanker Brown again finds himself out of the match-day squad this weekend, while another former skipper, hooker Ross Ford, is demoted to the bench.

However, Laidlaw is unconcerned by the fate of his predecessors and is thrilled to lead his country.

"For me, it's the ultimate honour," he said. "It gives me great pleasure - what a great thing to do - and I want to take Scotland in the right direction.

"What's happened to previous captains, I can't control that. I'm just training hard to get my performance right on the field and I'm sure the rest of the team will follow."

And the normally garrulous Australian was in a terse mood when fielding media questions at his team announcement on Tuesday.

"He's as passionate as ever and he'll be a little bit prickly, like everyone else has been," said Laidlaw. "He's annoyed as much as anybody.

"Once we cross that white line there is not much he can do about it.

"He's been upset about some of the performances and rightly so.

"But we'll all be going in the same direction to get a positive result this weekend."