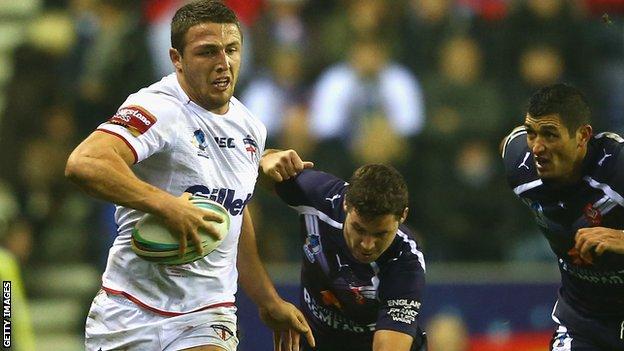 England rugby league forward Sam Burgess is to switch codes and move to Bath on a three-year contract.

The Premiership club will pay Australian side South Sydney Rabbitohs about £270,000 (500,000 Australian dollars) for the 25-year-old.

He will join at the end of the NRL season in October.

"With 2015 being a Rugby World Cup, it was an opportunity I had to pursue," Burgess said. "I can't wait to get my head down and start learning the game."

The forward played four times in the 2013 Rugby League World Cup as England were beaten by New Zealand in the semi-final.

England rugby union head coach Stuart Lancaster met Burgess in Australia in August, and sees him playing at centre in the 15-man game.

The 2015 Six Nations starts on 6 February, giving Burgess around three months to adapt for that tournament. The 2015 World Cup, which is being held in England, starts in September.

Burgess said: "This has been a tough decision for me to make, as I've loved my time in Sydney with the Rabbitohs. However, I'm very excited about the challenge that this move offers me.

"An opportunity presented itself to head back home to England and to pursue a chance to represent my country in two different sports."

Bath had been under the impression the Rugby Football Union would be responsible for paying for Burgess's release but the RFU initially distanced itself from the deal, conscious of the reaction of the other Premiership clubs.

On Monday, however Lancaster revealed the RFU could yet be involved financially, stating: "I think there are discussions ongoing."

Bath head coach Mike Ford, a former rugby league player and coach, said: "I've known Sam since his rugby league days in England and he is an exceptionally talented athlete.

"I've no doubt Sam will fit in seamlessly here at Bath and we're looking forward to having him join us and start making the transition."

Speaking earlier this month, Lancaster said it would be "a challenge" for a rugby league player to make a successful transition into union in time for the 2015 World Cup.

But he added: "There's a bigger picture about developing a team that goes way beyond 2015."

However former England centre Jeremy Guscott told BBC Sport he would be "surprised" if next year's World Cup came too soon for Burgess to be involved.

With his move to Bath still eight months away, Burgess vowed he would continue to "do his best every week" for the Rabbitohs, whose coach Michael Maguire said the Englishman had made a "real impact".

Burgess, from Dewsbury in West Yorkshire, made his Super League debut for Bradford in 2006 and went on to make 79 appearances for the club.

In September 2009, the Rabbitohs announced they had signed Burgess on a four-year deal from the 2010 season.

Six months ago, he made rugby league history by playing alongside older brother Luke and younger twins Tom and George as the Rabbitohs, whose majority shareholder is actor Russell Crowe, beat Sydney rivals Wests Tigers in an NRL game.

It was the first time in more than a century four siblings had played together in a top-flight rugby league match in Australia.