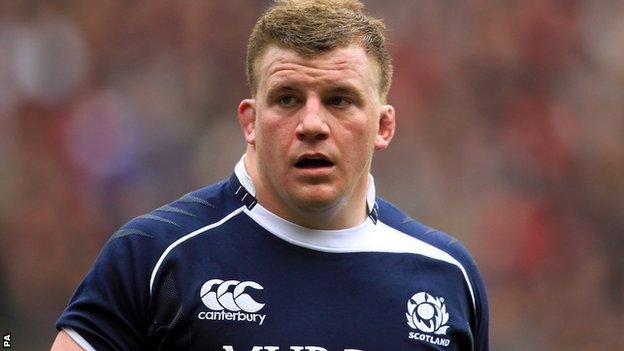 The 29-year-old, who will join at the end of the season from Glasgow Warriors, has won 25 caps for Scotland.

It's a massive challenge for me, but it's one that I am certainly looking forward to

"I think he is a good quality signing and a guy who has not yet peaked as a tight-head prop," said Exeter head coach Rob Baxter.

"It is obviously a very good signing for us as we are losing a couple of quality tight-heads so a replacement has been a big part of our recruitment.

"We want to be a very good Premiership club so we have to recruit players that we feel fit in with what we want to do here, but who will also add things."

Low has been at Glasgow since 2006 and has made nearly 150 appearances for the Scottish side.

"It's a massive challenge for me, but it's one that I am certainly looking forward to," said Low.

"Exeter are a quality and ambitious club and they've really established themselves within the Premiership over the last few years.

"Having met and chatted with Rob and had a look around the place, I really like what's happening down there: the style of rugby they play, the crowd they've got behind them, you can see the Chiefs is a great place on and off the field."

Tui has agreed a deal with French club Lyon, while Mitchell is returning to his native Wales to join Cardiff Blues.