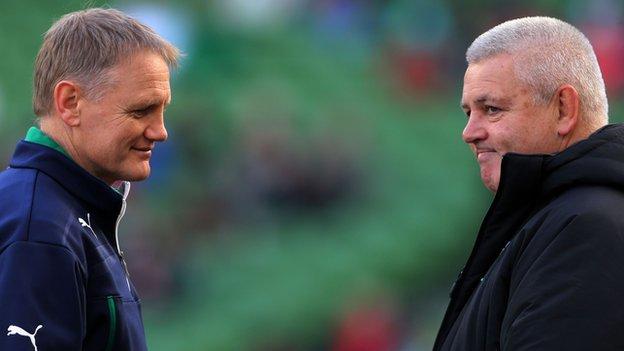 Warren Gatland says Wales' display in their 26-3 Six Nations defeat by Ireland was one of the worst of his six-tournament reign.

The coach said there were no excuses for his side's display against hosts who "thoroughly out-played" his side.

"It's probably one of the worst performances that we've had since I've been involved," said Gatland.

He may make changes to face France on Friday 21 February in Cardiff after Wales' pack were "well beaten".

Gatland said that he and his fellow coaches also need to take responsibility for the manner of the loss at Dublin's Aviva Stadium.

He criticised the poor discipline and maul-defence of the 2012 and 2013 championship winners.

"We were well beaten up front, weren't we?" said Gatland.

"We'd spoken all week about discipline and we gave away 17 penalties.

"We worked hard all week on maul-defence and I think they scored 20 points from mauling us.

"So from me, from the coaches, we need to take - not just the players - we need to take responsibility as well in terms of, did we coach effectively and well enough during the week?

"Ireland played an effective game. They didn't move the ball - I think the kicking stats were something like 37 to 21 - but they kicked the ball and played a simple game, and competed really hard at the breakdown and put us under some pressure.

"So they thoroughly deserved the victory. I thought they played really well.

"We spoke about discipline all week and 10 is the magic number for us, trying to give away 10 or less penalties.

"So when you give 17 away, that's disappointing because it had been a focus for us.

"We probably need to look at some individuals and give it a shake up.

"And we'll look to see if we need to do that or give those players we selected today an opportunity to redeem themselves."