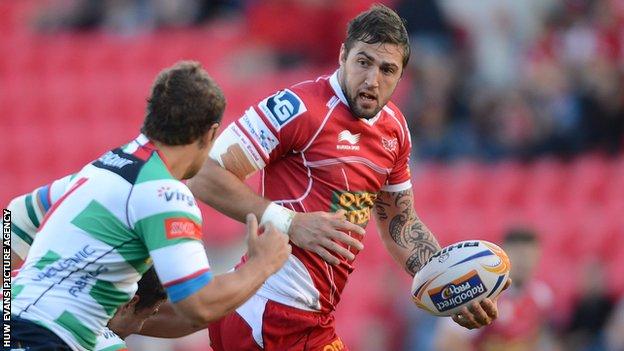 Wales back-row Josh Turnbull will join Cardiff Blues at the end of the season after agreeing to move from Scarlets.

The 25-year-old blind-side, who has won five Wales caps, joined Scarlets in 2007 having previously played for Carmarthen Quins and Llanelli.

"Blues are looking to add depth at number six and that is where I want to play," Turnbull said.

"I have played across the back line, but I want to focus on one position and move my career up another level."

Turnbull has represented Wales at Under-18, U19 and U20 levels and was named in the Wales senior squad for the first time for the 2011 Six Nations.

The Haverfordwest-born flanker made his Test debut as a replacement in the 24-6 win over Scotland at Murrayfield that campaign, and was also selected for the 2012 tour to Australia.

However, he missed out on a place in the Wales squad for this season's Six Nations.

"Ultimately I have ambitions to play for Wales again. I haven't done that since the autumn of 2012 and that is a huge target for me," Turnbull added.

"Blues are looking to add depth at number six and that is where I want to play. I have played across the back-row, but I want to focus on one position and move my career up another level.

"I feel focusing on one position week in and week out will improve me; hopefully I can move my game up and push my international claims once again.

"I have been at Scarlets for seven years and feel now was the right time for a new challenge.

"I owe a huge thanks to everyone at Scarlet. It was actually [current Blues director of rugby] Phil Davies who gave me my first professional contract and I will always be grateful for that.

"Since then I've worked with some great coaches at players and I will leave with many happy memories."