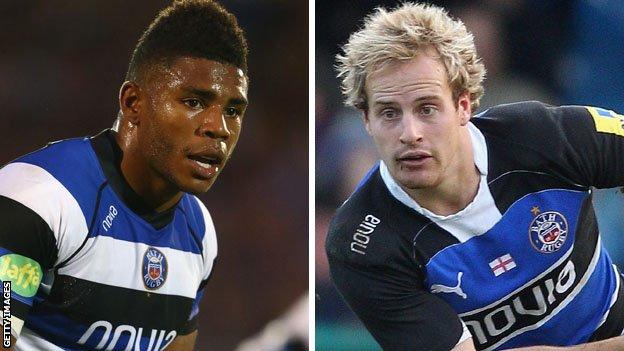 Bath have announced centre Kyle Eastmond has signed a new contract, but full-back Nick Abendanon is to leave the club at the end of the season.

Abendanon has agreed to join Top 14 side Clermont Auvergne in the summer after the French side agreed to pay an undisclosed transfer fee.

Eastmond, 24, joined Bath in 2011 after switching codes from rugby league.

He had an injury-hit first season in the 15-man game but has now made 46 appearances for the club, scoring eight tries, and has two senior England caps.

In November, Bath were forced to play down speculation that Eastmond was keen to return to rugby league, after he walked out at half-time during Bath's LV= Cup win over Sale.

He has now signed a new two-year deal with the West Country outfit - and remains on England's radar, having started for the Saxons in their draw with Scotland A on Friday.

"We've been talking to Kyle for quite a while and it was never in doubt," head coach Mike Ford told BBC Radio Bristol.

"He's happy to stay and we are happy to keep him."

Abendanon won his first England cap as a replacement against South Africa in Pretoria in June 2007, and made his second and final appearance when he started the 21-15 defeat by France at Twickenham two months later.

Eastmond added: "I've learned so much since joining Bath and that's down to the set-up here and the people around me.

"All I want to do is improve and to help the team achieve great things. I'm really happy to have extended my contract as there's no other club I'd rather play for."

But following the arrival of teenage England prospect Anthony Watson in the summer, he has struggled to keep a first-team place at Bath.

"Nick approached us at the start of the season and said there was an offer pending in France," explained Ford. "It was a shock at the time.

"We discussed it with him and his desire to play in France at this time of his career was very strong.

"We granted him early release from his contract and it's been very amicable. He goes with our best wishes."

Abendanon told the club website: "I have loved every minute I have played for Bath and want to thank the club for giving me the opportunities they have.

"This has been an extremely hard decision for me, but I feel this is the right time to challenge myself in a new environment."