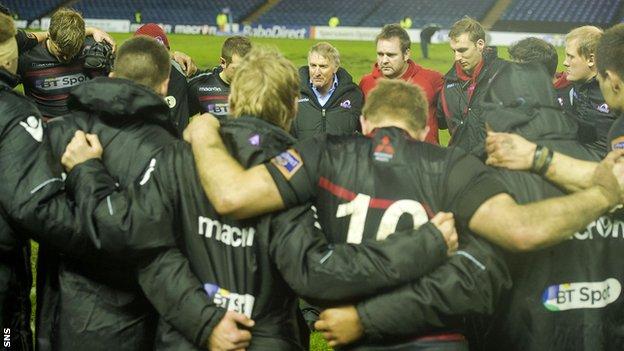 Dougie Fife scored the only try of the match as Edinburgh ran out 11-6 winners, with Greig Laidlaw's two penalties also proving crucial.

"The side played with tremendous heart, commitment and composure," Solomons told BBC Scotland.

"There were times when we were on our line near the end and we held our nerve and defended outstandingly."

The side played with tremendous heart, commitment and composure

And the skipper impressed at scrum-half, along with stand-in fly-half Greig Tonks, in wretched conditions.

Ian Madigan kicked the visitors ahead, but Laidlaw's solo break took Edinburgh to within the 22 and the hosts kept possession for Tonks to find wing Fife sliding in on the left.

Laidlaw kicked a penalty before the interval, while he and Madigan traded three-pointers in the second half.

Leinster managed one last push in search of a try, but Edinburgh held on under their own posts to take a significant scalp.

Solomons hailed his side for a "good all-round performance" at Murrayfield.

"We have a fantastic defensive coach in Omar Mouneimne and the guys have now adapted to his systems and one can see the evidence of that," he added.

"I'm sure they'll continue to improve."