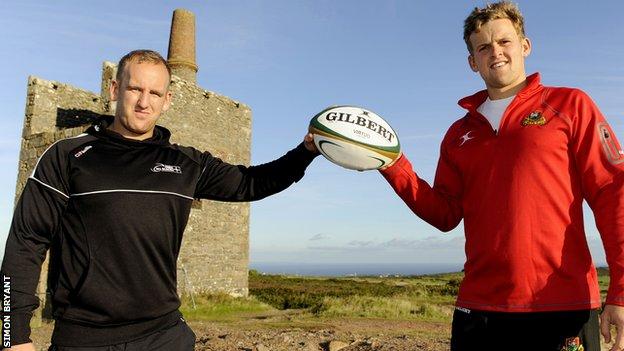 The Cornish derby between Redruth and Launceston will test family loyalties in the Westren house this Christmas.

Older brother Ryan lines up for the Blacks while his younger brother Murray starts at full-back for the home side.

"Dad's pretty neutral but if I had to stick my neck on the line I'd say mum would want a Launceston win," Ryan told BBC Radio Cornwall.

Murray added: "She says she wants a draw but she definitely had her black shirt on in the first game."

The elder sibling explained that his seven seasons at Polson, interrupted by spells in the Championship with London Scottish and the Cornish Pirates, are the reason for his mother's support.

"Ultimately she wants both of her boys to do well," Ryan continued.

"But I've had a long affiliation with the club whereas Murray has only been at Redruth for a couple of years, so she's spent years supporting the Blacks against the Reds and built up a bit of loyalty."

In fact the 24-year-old used to miss games, when he played for the Pirates Amateurs, to watch his big brother play.

"It is odd playing against him," said Murray.

"I'm obviously really close to my brother and I've always supported him.

"We realise it's just a game of rugby and for the hour-and-a-half we're out there it'll be a good battle."

The two first clashed in the reverse fixture at Polson Bridge in September, which the Cornish All Blacks won 31-10, and will now do so again on Saturday.

"I remember my first derby, it was such a massive thing," said 29-year-old Ryan.

"I've played with a lot of the Redruth lads since I was a kid, but the guys that didn't have that history had hatred for them and just wanted to get one over them in the derby.

"Maybe now there are more Cornish boys at Launceston these days, that hatred isn't there anymore.

"It's a bit different when you've all grown up playing with or against each other and for Cornwall."