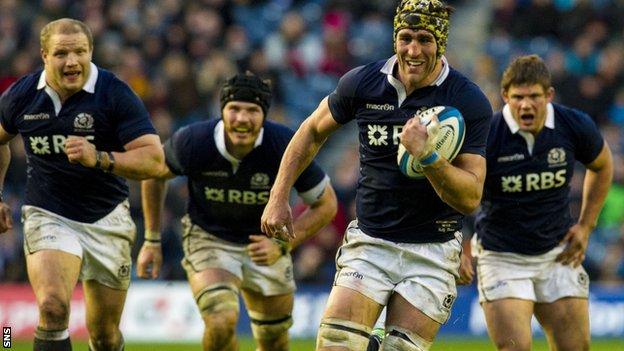 Vern Cotter should make his bow as Scotland head coach against the United States in Houston on 7 June.

The 51-year-old New Zealander will replace Scott Johnson once his contract with French club Clermont expires at the end of the season.

The summer tour will also include Tests against Canada, Argentina and South Africa in June.

And Scotland's autumn opponents have been confirmed, with Argentina, New Zealand and Tonga visiting in November.

Johnson will oversee the Six Nations fixtures before moving into a director of rugby role.

Scotland will meet Canada in Toronto on 14 June before journeying on to Argentina and then South Africa for fixtures on 21 and 28 June, with venues yet to be confirmed for the Pumas and Springboks Tests.

A return match against Argentina will be played on 8 or 9 November.

World champions New Zealand visit Murrayfield on 15 or 16 November, while Tonga will close out the three-match series on 22 or 23 November.

Scotland go into next year's Six Nations on the back of an autumn win over Japan and defeats to South Africa and Australia.