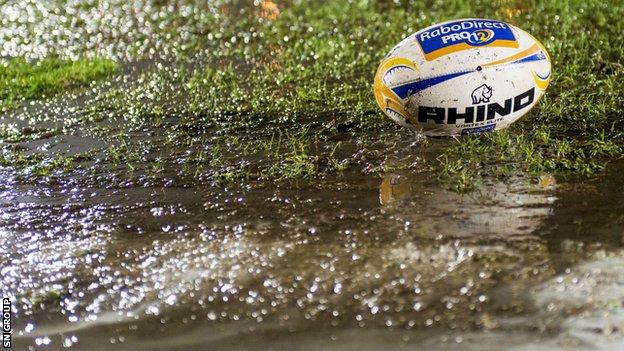 The Pro12 match between Glasgow and Treviso has been called off because of a waterlogged pitch at Scotstoun.

The match officials conducted an inspection at 18:05 GMT and ruled the surface unplayable.

"The players want to play, but there's no way you could play here," said Glasgow head coach Gregor Townsend.

"There's puddles of water here and you have to look at the safety of our players - never mind the spectacle we would put on for the support."

Glasgow were seeking to get back on track in the league following consecutive Heineken Cup defeats to Cardiff Blues.

"It's disappointing, especially for the players," added Townsend. "When you prepare all week, you get a game plan put together, physically you rest, then you get the build-up during the day.

"You want the release - you want to play, and although it's wet, it's not too cold."

Following a day of heavy rainfall in Glasgow, BBC Scotland reporter Phil Goodlad described the pitch as "a quagmire".

"It was like a cartoon as the referee tried to bounce the ball on different areas of the pitch," he said.