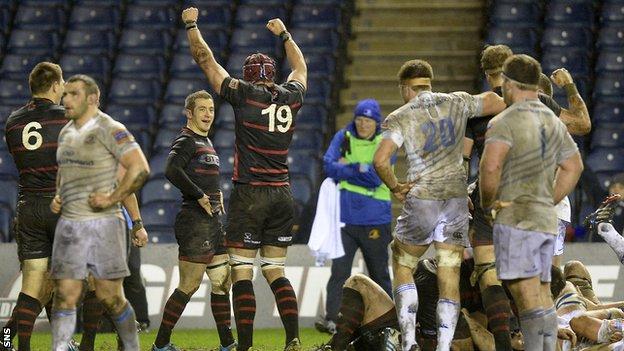 Edinburgh turned in a determined effort to earn a thoroughly deserved triumph over Pro12 champions Leinster at a wet and windy Murrayfield.

Dougie Fife slid in for the game's only try on the half hour as the hosts led 8-3 at the interval.

Leinster threatened to steal the points with a late period of pressure but Edinburgh held firm for victory.

The win is Edinburgh's fifth success from 10 league outings and follows Sunday's Heineken Cup win away to Gloucester. It also denied Leinster the opportunity to catch leaders Munster, with the three-time champions of Europe dropping to third in the standings.

With the gusts swirling and rain lashing down, both sides kicked for territory in the opening stages, while Edinburgh's Roddy Grant made good ground from an early line-out drive before the ball squirmed from David Denton's grasp in the tackle.

The downpour eased slightly on 17 minutes as Leinster put together their first attack of note but the home side maintained their discipline to thwart the defending champions.

However, Cornell du Preez was guilty of not rolling away soon after and presented Madigan with a penalty from the 22, which the fly-half popped between the posts with ease.

The crowd came to life when Laidlaw went scurrying through a huge gap in the Leinster ranks but the Edinburgh skipper lacked support and was eventually crunched by prop Martin Moore in a glaring mismatch of weights.

But the scrum-half was shortly on his feet orchestrating a patient move that culminated with Greig Tonks missing out the charging Jack Cuthbert to send Fife slithering in at the corner for a score.

Laidlaw could not convert from a tight angle but was successful with a close-range penalty when another driving maul from a line-out had Leinster back-pedalling, with Isaac Boss the man penalised for coming in from the side.

A booming penalty kick from Tonks had Edinburgh five metres from the line as the hosts grew in confidence but Leinster held on to go into the break five points behind.

The deficit was briefly reduced within three minutes of the restart as a penalty from Madigan just crept over but Laidlaw replied immediately with a much more convincing effort at the other end.

With the rain off, Leinster, who made 11 changes from last weekend's dramatic Heineken Cup defeat by Northampton, began to run more with the ball in hand.

But handling errors prevented the visitors from building up a head of steam.

Laidlaw kept prompting Edinburgh forward and there were fruitless boos of protest from the scarcely populated stands when Kevin McLaughlin eased Nick de Luca away from a cute chip from the scrum-half before the back row gathered.

A thrilling, slaloming break from Laidlaw ended with a clever kick to the wing which was taken out of play by the visitors but Edinburgh could not profit from the line-out as du Preez was brought down a metre short and the hosts conceded a penalty in their rush to get the ball over the line.

More excellent mauling resulted in another penalty for Edinburgh but Laidlaw's long-range attempt was a fraction wide.

Leinster needed a try and laid siege to the home line with the clock ticking down and a powerful surge was held up by the padded base of a post as Edinburgh defended desperately.

Edinburgh's tenacity forced a knock-on but they could not clear their lines from the resulting scrum, stoking up the tension.

However, a second scrum was dealt with in more convincing style, allowing man-of-the-match Laidlaw to kick to touch and begin the celebrations.