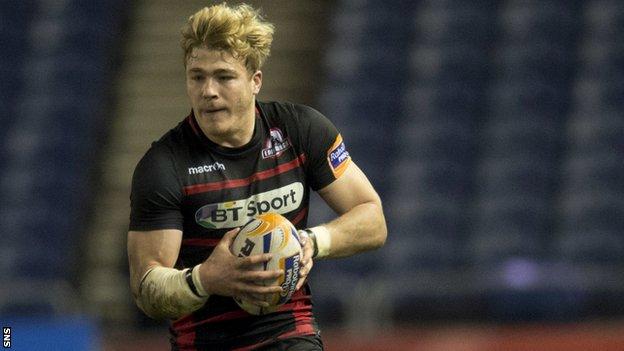 The 23-year-old, who hailed the impact of new head coach Alan Solomons, will remain at the club until 2016.

"I've really enjoyed my time at Edinburgh and I think the new coaching team has been a great change for the club," he said.

"They've been a big influence on me already."

Denton arrived at Edinburgh Rugby in the 2010-11 season following a successful spell for Scotland Under-20s and Scotland Sevens.

And the 17-time capped forward said he was relishing the prospect of working with Solomons and the other coaching staff comprising Omar Mouneimne and Stevie Scott.

"I've a huge amount of respect for them and I think they are the right people to take this club forward," said Denton.

"There is a very bright future for this club and I want to be part of it."

Denton revealed he was happy to commit his future to Edinburgh, despite interest from other clubs.

"I was in discussions (with a couple of other teams) but am very happy at Edinburgh," he said.

"We're beginning to play the style of rugby that the new coaching team want from us and building something. I believe we should be winning silverware in the last year of my contract (season 2015-16)."

Solomons said Denton's contract extension was "massively important for both Edinburgh and Scotland".

"What is important for me, however, is his willingness to up his work-rate and to get involved in facets other than the ball carrying, for which he is renowned.

"He has a very promising career ahead of him. He has made a tremendous contribution already this season and will go on to play a very big part in this club going forward."