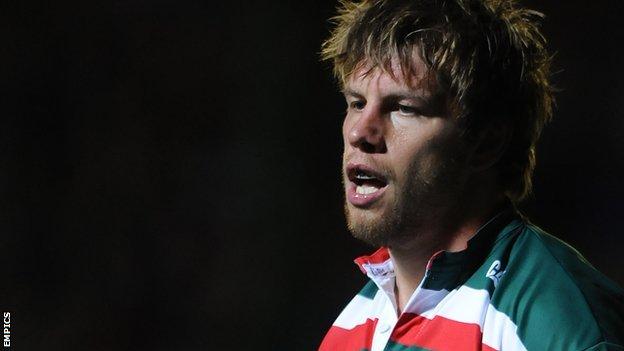 Retiring Leicester forward Brett Deacon says he was told he is lucky to be alive after contracting lupus.

The 31-year-old announced on Wednesday he would be quitting on medical advice.

Lupus is a disease where the immune system attacks the body's own tissues and organs, including the kidneys, heart, lungs and blood.

"The specialist said with the amount of clots I had I was lucky to be alive, with the potential for heart attacks," he told BBC Radio Leicester.

"I flagged it up after my brother's testimonial game because I felt so so strange and couldn't breathe properly, so that would have been interesting had I collapsed during the game.

"I went for some tests and had to go on blood thinners instantly, which I will be on for the rest of my life.

"It's a tough pill to swallow having to retire through illness, but first and foremost comes your health."

It's a tough pill to swallow having to retire through illness, but first and foremost comes your health

Deacon, brother of England international and Tigers vice-captain Louis, is in a minority in that 80% of those affected by lupus are women between the ages of 15 and 45.

Deacon will work as an assistant coach with the club's academy, having made 116 appearances at Welford Road.

The Leicester-born former Syston and Wigston player added: "First of all I was a supporter as a local boy and that's how it all started.

"To then actually play and alongside your brother is all you aspire to doing. Looking back now, I'm really proud to have done it."