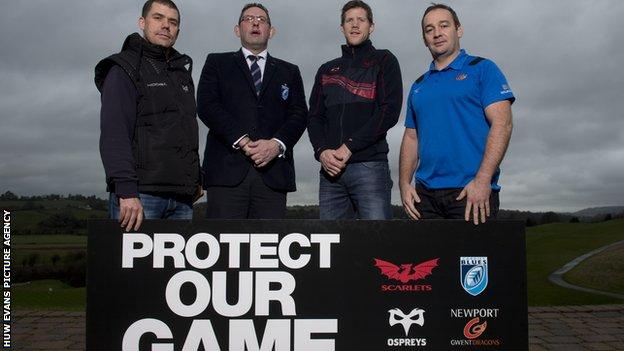 Scarlets centre Gareth Maule has appealed for the dispute between the regions and the Welsh Rugby Union to be settled so players can plan their futures.

Maule was in a group of players which met the Welsh Rugby Union on Monday.

"It's a big black banner with the badges of the four regions and it says Protect Our Game.

"We've been told they're going to go up around Cardiff Arms Park on Friday night and they're hoping as well that the supporters on one of the terraces will have one of those big football style silk type banners that unveil from the back of the stands."

"It's something that's not ideal especially leading up into an important part of the year," Maule said.

"To say that it's not at the back of people's minds would be a complete lie because it's our livelihoods," he added.

"But we've just got to get on with things and just hope and pray that things are sorted sooner rather than later and that guys' futures are not so much hanging in the balance but clear and moving forward."

His comments came as the four regions - Scarlets, Ospreys, Blues and Dragons - held a joint media conference to promote their Christmas Pro12 fixtures.

The regions used the launch to mount a public campaign as part of their dispute.

They will unveil placards and banners bearing the words 'Protect Our Game' during the matches, which begins with Cardiff Blues v Ospreys on Friday.

The derby matches will be played at an uncertain time for the professional game in Wales.

The regions, who are considering a break away from the WRU to play in a possible new Anglo-Welsh league, have until the end of December to sign a new agreement with the Welsh Rugby Union, or face losing funding.

The WRU had said last week it was "hopeful" this participation agreement between the parties would be signed before its 31 December deadline.

The agreement places obligations on both sides, for example, tying the regions into playing in the Pro12 and Heineken Cup and making players available for international matches, while setting out the funding coming from the WRU for the next five years.