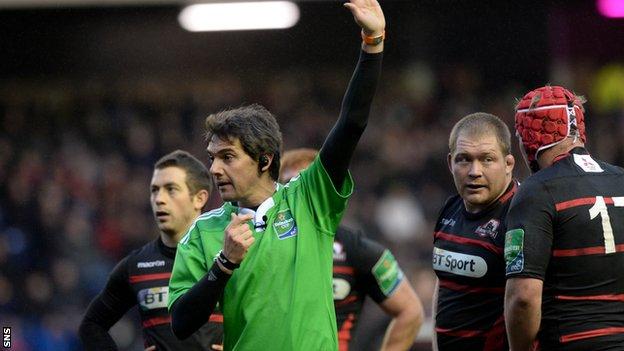 I don't watch a huge amount of games live in person, and I don't even really see many games live on the TV. I record the action and fast forward through it, trying to find the good bits.

This weekend was different and I was able to indulge in a couple of European matches, in front of the fire and with no kids as a distraction. I chose a good weekend with some great skills, commitment, intensity and drama. It was pure entertainment.

However, for me, there was a big downside to these spectacles. We are all aware of one of the long-standing issues in the modern game with time spent on scrummaging, with free-kicks, penalties and certainly re-sets occurring more often than not. It drags the game out and can ruin the atmosphere in a stadium. But this is not my main issue.

The television match official (TMO) has been playing an increasing role recently. They have a bigger remit on what they can adjudicate on and they are being used with more frequency.

Are we moving towards more of an American Football-type viewing scenario?

You can't blame the referees for using them as it's just too big a gamble if they were to get it wrong without referring it "upstairs". Remember, they are being critiqued on their performances too.

The TMO can be called upon in the event of any of eight facets of the game. Seven - knock-on, forward pass, player in touch, offside, obstruction, tackling a player without the ball and double movement - are linked with a try-scoring situation and up to the two phases prior to that. Also, at any stage in the game, the TMO may be called on to review an act of foul play.

I think there are two problems with the current use of the TMO. The first is the time taken to make decisions and the frequency of use. The knock-on effect it has on the game as a spectacle is significant. In the recent Italy v Fiji Test match, the first half lasted 59 minutes such were the number of referrals. Are we moving towards more of an American Football-type viewing scenario?

The other problem is the accuracy of the TMO decisions. Rugby union is a complicated sport - the list of rules is huge and many rules are subject to interpretation. The forward pass probably provides the most controversial moments.

"For forward passes," the IRB rulebook states, "the TMO must not adjudicate on the flight of the ball but on the action of the player who passed the ball, i.e. were the player's hands passing the ball back to that player's own goal-line?"

I've watched instances where a pass has been referred to the TMO and completely disagreed with the decision, and I'm sure you all have - even knowing the rules.

Potential infringements must be "CLEAR and OBVIOUS" for a try to be disallowed. So how many times does a TMO need to watch a potential forward pass - does it need to be 8-10 times or should clear and obvious determine that one or two looks should suffice?

Or take Friday's Glasgow v Cardiff game. The referee referred Niko Matawalu's 'try' to the TMO as he was concerned over obstruction at the breakdown by Robert Harley. Try not given, penalty Cardiff. My opinion - Harley was within his rights to clear the threat out at the ruck and the try should have stood.

Could the TMOs talk us through their decisions, like in rugby league, as they review the footage? It would certainly give the viewer more understanding.

Come to think of it, why should the TMO be used primarily for circumstances surrounding the act of scoring a try? Presumably because tries contribute significantly points-wise and therefore affect outcomes of matches. How often is it that penalty kicks win a game, though?

Cast your minds back to Gloucester v Northampton at the start of the season. Had a TMO been involved at any stage after a last-minute score then the visitors would have won the game. Players in front of the kicker at the kick-off, dodgy scrum call etc. Surely this merits adjudication from a TMO?

The root of the problems is the rules are open to interpretation in many ways and our sport is a very difficult one to officiate perfectly, even with the help of the TMO. The game is suffering as a spectacle and, with the well-documented issues of the scrum, it is a problem I believe we can do without.

My solution would be to leave the vast majority of the decisions to the referee and his two assistants and call on the TMO with issues concerning the grounding of the ball and whether the player is in touch or not prior to scoring. For foul play, if it has not been seen properly, put it on report like in rugby league and deal with it later.

It seems like we are looking for reasons to not give tries - I'd rather watch a game with six tries and a couple of slightly forward passes than watch a lower-scoring game that has more stoppages and less flow. We're in the entertainment industry after all.