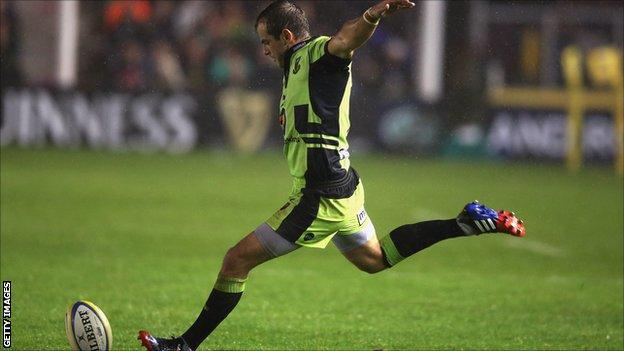 Stephen Myler sent over a penalty with the last kick of the game to help steer Northampton to victory at London Wasps.

Saints led 11-9 at the break through Christian Day's early try and two kicks from Myler, while Elliot Daly and Andy Goode kicked three penalties in response for Wasps.

Myler sent over his third after the restart to give them a five-point lead.

Joe Carlisle's penalty reduced that lead and he added another two minutes from time before Myler's late heroics.

Northampton conceded an early penalty when Luther Burrell was adjudged to have illegally tackled Goode. The outside half was receiving treatment for a leg injury and therefore unable to take the kick but Daly made no mistake.

Saints looked to have immediately responded when Burrell collected the restart and burst over, only for the TMO to rule out the try.

But the visitors were not to be denied for long and took the lead when lock Day finished off a line-out drive for a try which Myler was unable to convert.

Myler extended their lead with a penalty before the now-recovered Goode kicked two penalties in quick succession for Wasps. However, Myler had the final say of the half with his second successful penalty.

Northampton club captain Dylan Hartley took the field after 57 minutes, together with Tom Mercey, just in time to see the Saints go further ahead with another penalty from Myler.

Carlisle became Wasps' third kicker of the afternoon and his successful penalty brought the home side to within two points with 14 minutes remaining.

Daly missed two penalties as Tom Wood was yellow-carded for an illegal charge on Joe Launchbury.

Lee Dickson was Northampton's final replacement with six minutes to go but the scrum-half was guilty of a tip tackle and this time Carlisle looked to be Wasps' hero with a successful penalty, before Myler broke their hearts with his late effort.

Wasps head coach Dai Young: "It was a hard decision to accept as it was for non-engagement at the first set.

"It was the first penalty for that offence during the game when there was reset after reset."

Saints coach Jim Mallinder: "The referee made a couple of close decisions. He made a brave decision at the first scrum and we were lucky it went our way.

"Stephen Myler is steady in those circumstances and kicked very well throughout the game."