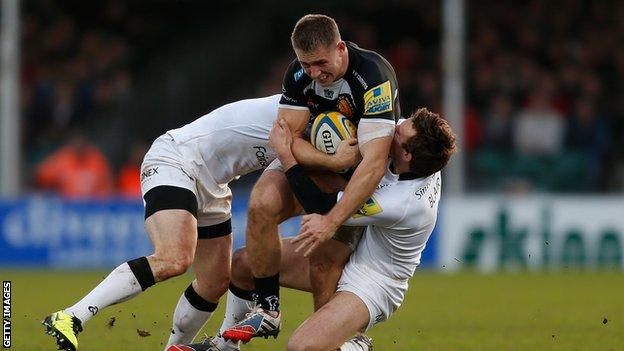 Exeter moved back into the top half of the Premiership table with victory over Newcastle at a blustery Sandy Park.

Scrum-half Haydn Thomas crossed for the Chiefs, who had lost their previous five games in all competitions.

Gareth Steenson kicked three penalties and a conversion for the hosts, while Phil Godman slotted over a three-pointer for Newcastle before the break.

But it was all the Falcons could muster as Dean Richards' side fell to a fourth consecutive league defeat.

With the wind in Exeter's favour in the first period, fit-again fly-half Steenson landed the first three points following an infringement at the ruck and extended the lead when Falcons centre Danny Barnes was penalised for a high tackle on Thomas.

Barnes gave away another penalty for a shoulder charge on Exeter's Jack Nowell and Steenson made it 9-0, before Godman reduced the deficit with what proved to be Newcastle's only points of the game after Dave Ewers was punished for not releasing in the tackle.

Thomas's smart dummy and dart over the line, converted by Steenson, put the home side further in control and they held firm in the final 20 minutes to end their five-match losing sequence.