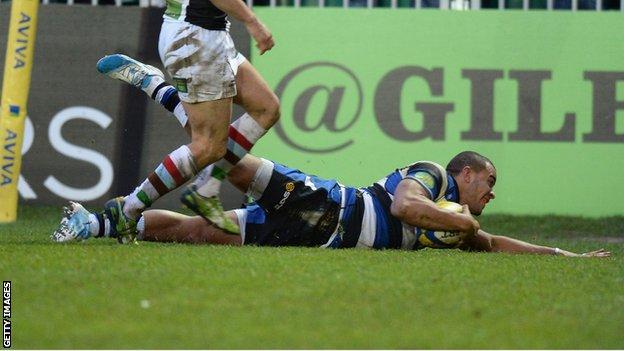 Bath extended their run of successive wins to 11 with victory over fellow Premiership high-flyers Harlequins.

Three pinpoint penalties from George Ford put the hosts into an early lead, but Nick Evans's penalty kept Quins in touch at 9-3 at half-time.

And the hosts held on despite Tom Guest having what appeared to be a late Quins try not given by the referee.

Harlequins, who remain fourth, were unlucky not to take at least a losing bonus point from a game played at a frenetic pace from the off, and the defeat stalls their recent revival having won seven of the previous eight going into the clash.

However, victory for Bath in their first league game since director of rugby Gary Gold departed means they have gone an entire calendar year without a Premiership defeat at the Rec.

The win which keeps third-placed Bath in touch with the top two was in no small part thanks to England Saxons fly-half Ford, who had the hosts on the board within a minute after kick-off, drilling a penalty straight through the posts from 30 metres out, before taking full advantage of a Quins player going in off his feet to double the lead.

Quins, without Danny Care and Will Collier, were not to be deterred and piled the pressure on, with Karl Dickson and Tim Molenaar coming close to tries.

But in a physical opening to the game where tensions often boiled over, Ford kept his head to ensure the points were ticking over for Bath, picking himself up after a late hit from George Robson to put the hosts 9-0 ahead.

Evans finally opened the visitors' account with a penalty before the usually reliable Ford missed two penalties before half-time, either side of Quins seeing back Walker sinbinned for a tackle after the ball had gone.

Joseph then made their extra man count after the break when he picked up the ball 40 metres out and explosively drove down the left wing to cross.

But Ford again missed with his kick just five metres in from the touchline, and the game continued at an incredibly high tempo, with the visitors seemingly having the upper hand, only for poor decision making to be their downfall.

Right at the death, however, they appeared to have restored some pride when it seemed like Guest had crossed over the line, however the referee waved their protests away.

There was just enough time for Ford to uncharacteristically push another kick wide, but it did not matter as Bath ensured their only defeat at the Rec in 2013 was against Stade Francais in last season's Challenge Cup.

"Everyone knows about how Harlequins play the game and to keep them to three points is impressive. But the defence, along with a bit of forward domination, paved the way for the victory.

"We've won the A League this week, which is important. It's a happy place to be and people are enjoying coming to work but we know there is a significant improvement still to come along. That's the exciting thing.

"Look at the consistent top four performers - we've got three in three weeks. We'll have a better idea after that of our progress. But we aren't where we are in the table by accident."

"First of all, the side that won, deserved to win. But we are pretty disappointed that we didn't get the try that was 'scored', that it didn't go the Television Match Official.

"When a try is so openly and blatantly scored why did it not go to the TMO?"

"We gave them an easy six-point start. And the try they scored from a set-piece from 50 metres was off a line-out when we were down to 14 men.

"It was a pretty tight game and every little thing went their way as opposed to ours."