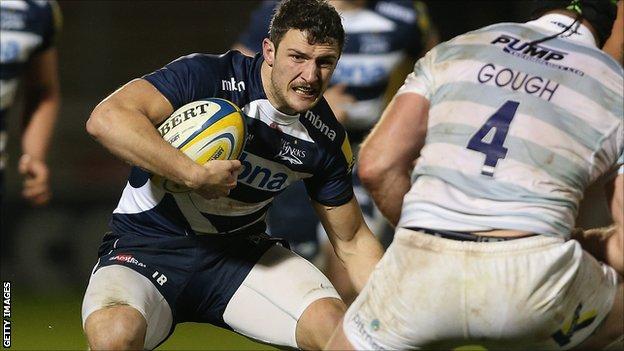 Sale earned their fifth victory of the season with a comfortable Premiership win over lowly London Irish.

First-half tries from Tom Brady and Dave Seymour with one conversion by Danny Cipriani gave Sale a 12-0 lead at the break.

Cipriani extended that lead with a penalty and soon after Irish forward Chris Hala'ufia was sent to the bin for a tip tackle to add to their problems.

In a turgid first half, played in difficult conditions, Sale took the lead through Brady's try after he beat James O'Connor to Cipriani's cross-field kick.

Cipriani, who had earlier missed a penalty, sent over the conversion, and the hosts extended their lead with Seymour bundling over after Sale did well to wheel round a rolling maul.

Cipriani's conversion was missed but they still held a 12-0 lead at the break and the outside half extended that lead to 15-0 with his first penalty of the night.

Irish's woes continued with Hala'ufia's temporary departure but Humphreys scored Irish's first points of the game with a penalty to give them some hope.

But it was all they could muster on a desperately disappointing evening in Salford.

"There's a lot of press about Danny (Cipriani) at the moment. Danny's playing well as he's playing for the team. What he's done is matured.

"We don't want to talk about playing for England just yet, just let him keep playing the game he's playing and if the opportunity comes in the Six Nations then brilliant, if it doesn't then there's the summer tour.

"But if he plays like he is playing and he controls the game like he is then the England coaches will definitely have to have a look at him.

"Overall, we're in a good position. We're moving away from the bottom four and with another couple of wins in other competitions, we could be in the quarter-finals of two other tournaments.

"We're in a far better place than we were this time last year but in reality we're in about the place that the squad, I and the coaches thought we would be in the summer if we played to our optimum, and we've done that."

"I was a little disappointed that we had 10 scrum penalties go against us. The scrums were going backwards but there was binding on the arms.

"Sale played the conditions fairly well so fair play to Sale but there was a crazy bounce on a cross-field kick for their first try and seven points is always going to be a lot on a night like this."