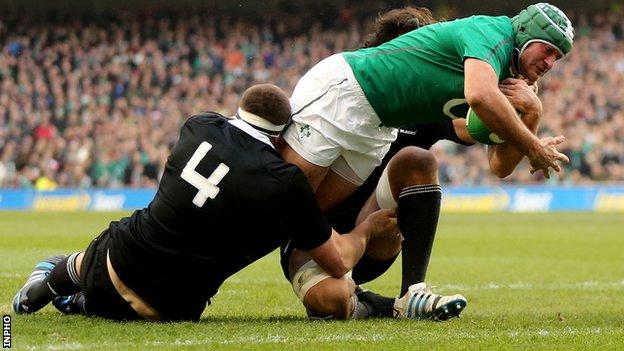 Ireland and Lions hooker Rory Best has signed a two-year contract extension with Ulster which will keep him at the Irish province until June 2016.

Best, 31, has played 143 games for Ulster since making his debut in 2004 and he earned his 70th Ireland cap in the recent game against New Zealand.

Welcoming the news, Ulster's director of rugby David Humphreys described Best as the "cornerstone" of the team.

"You would struggle to find anyone who is more committed," said Humphreys.

"He has represented Ulster for the best part of a decade now and he has achieved some of the highest honours that the game has to offer.

"He will be a key player in our team as we continue to build and improve in the coming years."

Irish Rugby's chief executive Philip Browne described Best as a "great servant to Irish rugby over the past 10 years".

"We are delighted to secure his future in Ireland for the next two years," added the IRFU chief.

Best said that the support he had receiving after initially missing out on a place in this year's British & Irish Lions squad had been a "massive factor" in his decision to agree a new Ulster deal.

"That made me feel very special and underlined to me that Ulster is more than a team, it is a community and a rugby family," said the hooker.

"I want to keep playing for Ireland for as long as I can and to try and win a few more things in the green jersey."

Dylan Hartley's suspension did result in Best receiving a late call-up for the Lions tour although Best's struggles in the defeat by the Brumbies ended his hopes of playing in the Test series.

Best is currently out of action after sustaining a broken arm in Ireland's agonising defeat by New Zealand last month.