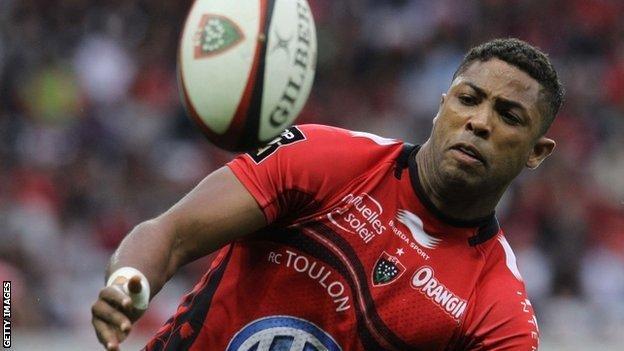 Full-back Delon Armitage has signed a two-year contract extension with French side Toulon, which lessens the likelihood of him playing for England in the 2015 World Cup.

England have a policy of not selecting France-based players because their club commitments mean they are not available for all training camps.

Armitage has not played for England since moving to Toulon in 2012.

"I'm glad I've extended with a club where I feel good," he said.

Armitage scored a try in the 16-15 win over Clermont Auvergne in the Heineken Cup final earlier this year to win the trophy in his first season with the club.

The 30-year-old started playing rugby with Nice before being selected for France's Under-16s team.

After a stint with Richmond, he signed for London Irish, where he spent 10 years before moving to Toulon.

His brother Steffon also plays for Toulon, with the 28-year-old signing a three-year extension last month.

The 2015 World Cup is hosted by England with the opening match taking place on 18 September.