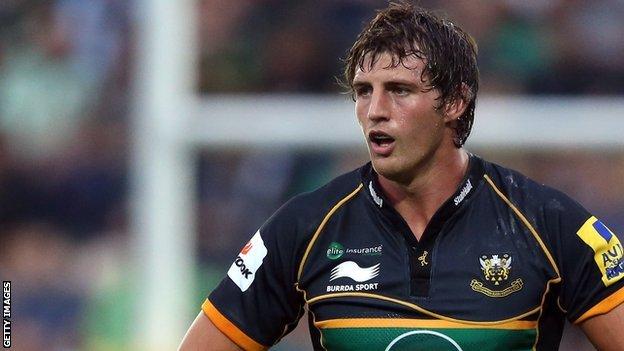 Northampton have agreed new contracts with five of their first-team forwards covering the "foreseeable future".

Franklin's Gardens has been a happy place all season so it's no surprise to see five players wanting to stay put.

There's a growing sense that this squad of players can continue to develop and ultimately go one further than May's Premiership final, which they lost to Leicester.

Retaining players such as Wood, Day and Dickinson is vital if they are to achieve this landmark, but keeping hold of Haywood and Nutley is equally significant.

It shows Saints can hold on to the talent they produce and that players on the fringes of the starting XV are glad to be part of the wider squad.

Saints coach Jim Mallinder said the deals "reflected the strong position the club finds itself in".

"It is a big statement for the club and the players that these agreements have been done so early," he said.

"Our aim is to have as good a squad as we possibly can, and this starts with making sure we re-sign the quality players we have here already."

The 27-year-old has since made more than 70 appearances in a Saints shirt, been awarded the Premiership Player of the Season in 2010/11 and captained England on this summer's unbeaten tour of Argentina.

A new contract for 28-year-old Dickinson shows how highly the club rate the former Rotherham Titans player, after his first season with Northampton was ruined by injury.

Dickinson broke his arm just days after signing for Saints in March 2012 and he finally made his debut on 7 September this year in a win against Exeter.

Former England Under-21 captain Day, 30, began his career at Sale Sharks before arriving at Franklin's Gardens in 2008.

Haywood, 22, and Nutley, 21, both came through the club's academy system and between them share over 90 first-team appearances.