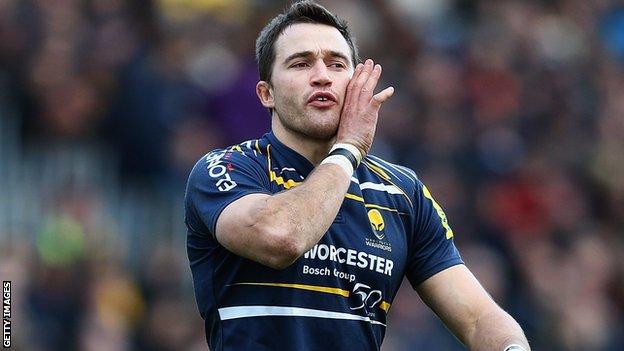 Worcester Warriors' Scotland centre Alex Grove has become the latest to commit his long-term future to the club by signing a new contract at Sixways.

Grove, 26, follows the lead of full-back Chris Pennell, who signed a new deal earlier this month, tying him to the club until June 2017.

"Alex embodies the type of player that will help us achieve our vision."

Grove has scored 12 tries in 75 Premiership games for Worcester since progressing from the club's academy to make his debut against Newport Gwent Dragons in 2006.

The foundations are now in place. And I want to be part of things when we ultimately move up the table

He has also won three caps for Scotland, making his international debut in 2009, before his six-month loan to Edinburgh for the first half of the 2010-11 season following the Warriors' relegation to the Championship.

And, although Worcester are looking relegation candidates again, having almost reached Christmas without winning a Premiership game, Grove believes that the summer appointment of Ryan and his revamped backroom team will ultimately bring reward.

"The foundations are now in place," he said. "And I want to be part of things when we ultimately move up the table.

"The club has really shaken things up and that's what we've needed.

"The club has clearly shown intent by the people recruited behind the scenes.

"And, in the next three or four years, I believe that it is achievable to become one of the top sides in the Premiership."