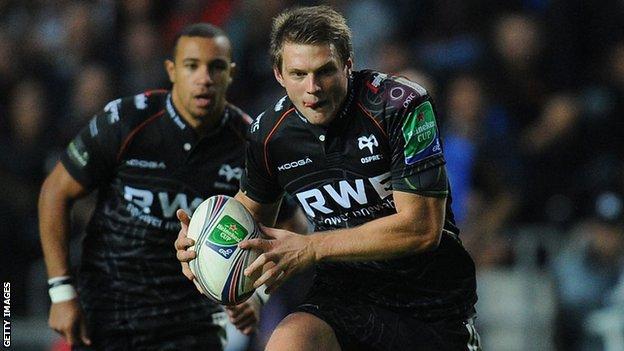 Wales international Dan Biggar has called on the Welsh Rugby Union and the regions to sort out their differences as soon as possible.

The Ospreys fly-half says the players are "worried" and "concerned" about the future of the Welsh game.

The regions are in dispute with the WRU over funding, player exodus and a possible Anglo-Welsh league.

"The sooner this gets sorted the better for all the great and good of Welsh rugby," said Biggar.

A deputation of professional players from the four Welsh regions met the WRU on Monday evening to discuss their concerns about the game.

It is not known if Biggar was part of that delegation, but speaking as members of the Ospreys squad met hospital patients in Swansea on Monday, he said the players wanted reassurances about their futures.

"It's a job at the end of the day and people have to get paid."

Seven of Biggar's Wales team-mates will be playing in France from next season, but he turned down an offer from Racing Metro last season and insists he is still happy to stay.

Biggar said in early December: "I love playing here. I love playing week in week out and hopefully I can do that for the next few years."

But while Biggar has decided to stay his fellow Ospreys Ian Evans (Toulon) and Richard Hibbard (Gloucester) are leaving the Liberty Stadium at the end of the current season.

And there is uncertainty over the future of two other Ospreys - Alun Wyn Jones and Adam Jones.

There is also concern about the Heineken Cup beyond the current season and whether there could be an Anglo-Welsh League, something Biggar's Ospreys colleague, Ryan Jones, has called for.

Biggar, 24, says all the uncertainty is unsettling for regional players.

"I would say it was concerning but the Union and the regions have to come to a decision," he added.

"It's all well and good them talking in a room for two hours and saying negotiations are going well.

"People are fed up with that now. It has to get done sooner rather than later because it's boys careers and livelihoods at the end of the day.

"It will be interesting to see what progresses from the Union and between the regions.

"It's about sorting the off-field stuff. If we can get that sorted everyone would be happier."