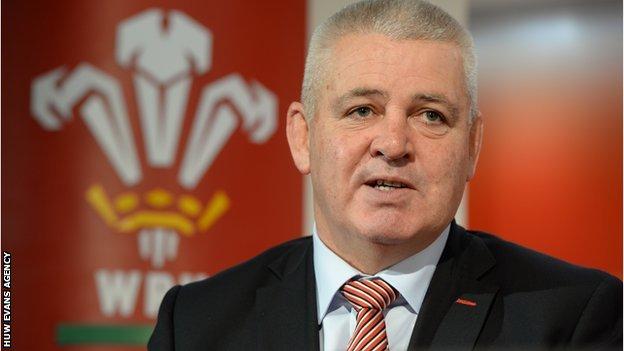 Wales coach Warren Gatland has predicted the exodus of star players to France will go into reverse.

Seven of Wales' top players are committed to be in France from 2014 and several more are tipped to join them.

But Gatland believes "France isn't going to be a long-term problem" because off-field support and standards do not match those in Wales.

"I think you'll find a lot of those players will go to France for a year or two and then come back," he added.

Fly-half James Hook and lock Luke Charteris are at Perpignan.

And centre Jonathan Davies and lock Ian Evans will join Clermont Auvergne and Toulon respectively at the end of the 2013-14 season.

The moves and speculation over others have come amid on-going uncertainty surrounding the future of regions Cardiff Blues, Scarlets, Ospreys and Newport Gwent Dragons.

Scarlets lost wing George North to Aviva Premiership side Northampton ahead of the current campaign.

And Gatland says as long as players follow North's example by negotiating release clauses for all Wales playing and training duties, he will not be unduly concerned by their absences from the Welsh domestic scene.

He added: "The information coming back to us from players is yes, the money's great.

"But everything else is a long way behind what they can get provided here in Wales in terms of medical stuff, strength and conditioning, length of season, time off in the off-season, quality of coaching and support stuff.

"So I think you'll find a lot of those players will go to France for a year or two and then make the decision to come back."

Fly-half Hook would seem to be an exception to Gatland's expectations, having

Gatland has also a player of Warburton's standing.

Meanwhile, Wales and Lions hooker for the 2014-15 season, having signed for Gloucester.