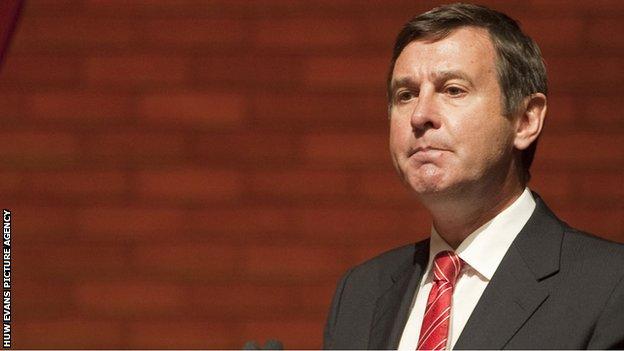 Players representing Wales' four rugby regions are to meet senior Welsh Rugby Union officials to express their fears over the future of the professional game.

The meeting is the latest development in the debate over the sport's future.

Ospreys hooker Richard Hibbard is the most recent player to opt out of Wales' domestic scene, announcing on Monday that he is joining Gloucester.

And his fellow professionals fear their livelihoods could be at risk.

The Welsh Rugby Players Association, which represents regional players, has yet to make a public statement on the issue.

Rows over funding, the future of European and other cross-border competitions threaten to divide Welsh rugby.

Wales' four regions - Scarlets, Ospreys, Cardiff Blues and Newport Gwent Dragons - have called for an independent public inquiry into how broadcasting and competition revenue is negotiated and distributed.

Fans of the regions are also to hold talks with WRU chief executive Roger Lewis to make their views known.

The dispute includes funding, the player exodus and a possible Anglo-Welsh league.

On Sunday evening, Regional Rugby Wales released a statement on behalf of the regions, which said they wanted an independent review to consider a number of issues linked to the distribution of broadcasting and competition revenues in the professional game in Wales.