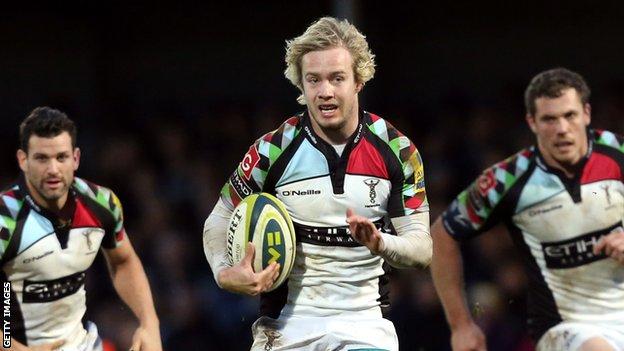 Harlequins back Charlie Walker says the side are improving after losing three of their opening five Premiership fixtures this season.

Quins have won seven of their last eight games to boost their hopes of a top-four finish and progressing in the Heineken Cup.

He told BBC London 94.9: "Momentum is really coming back with us. The start of the season wasn't great for us.

"We have slowly been building and are creating a lot of opportunities."

These boys are battling so well and so hard for this club. I keep on saying we will get stronger as we have a lot of players to come back

The 20-year-old added: "That is great for us. We are being more clinical now and taking the opportunities presented with us.

"We know what we do well and we have shown in the last couple of weeks we are getting better and better. If we keep putting our game on the park it is good for us."

The Twickenham Stoop side have moved up to fourth in the Premiership table and are now second in their Heineken Cup pool, with two group games left to play.

Director of rugby Conor O'Shea believes the side will be boosted by players returning from injury but has warned against over-confidence.

"We have got a really tough Christmas ahead of us, but an exciting one," O'Shea told BBC London 94.9.

"These boys are battling so well and so hard for this club. I am really proud of them.

"I keep on saying we will get stronger as we have a lot of players to come back. There are players that are straining to come back and get involved.

"But it changes overnight. Northampton gave everyone a salutary lesson in how things can change in one week."