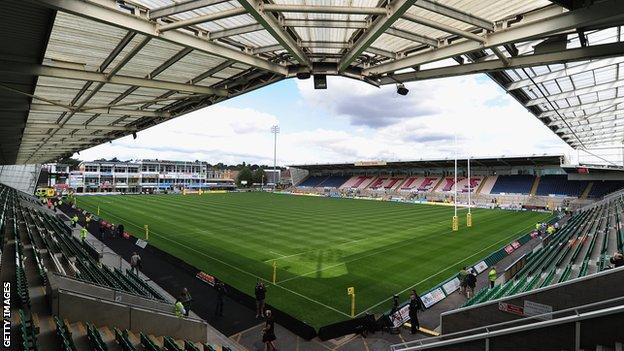 The 23-year-old forward impressed the Northampton management team while playing for the United States Eagles against New Zealand Maori in November.

Dolan has made six appearances for the USA national side and arrives from Life University RFC in Georgia, USA.

Artemyev made an immediate impression for the Saints - scoring a hat-trick of tries on his debut in a LV= Cup game against Saracens and adding two more on his Premiership debut.

Unfortunately, his try-scoring exploits were not to last. He soon dropped down the pecking order and his first-team appearances have been limited over the past year.

Meanwhile, Saints have released Russian wing Vasily Artemyev, 26, who had expressed a wish to return to Russia.

"I have a baby on the way," Artemyev told BBC Radio Northampton.

"This is the right time to do it. It's been an honour representing this club and I'm a far better player than when I came.

"I wasn't getting too much game time in the second half of last season and this season was quite disappointing, but it's part of a sporting career. You move on.

"I will definitely miss this place. I'll remain a Saints fan forever."

He scored nine tries in 33 appearances after arriving in 2011.

"Of course this leaves a bit of a hole in the squad, and we will be bringing in someone to fill that gap in the not-too-distant future."

Northampton have strengthened, though, with the addition of Dolan after Craig picked up a shoulder injury against Gloucester in November and now is expected to be out for months.

"We've kept a close eye on Cam for a while and have been impressed by what we've seen," Mallinder said.

"He's a player who has a lot of natural talent and the physical attributes it takes to succeed.

"Although the American league is developing all the time, it is a big step up to the professional environment of the Premiership and we're not expecting Cam to be the finished article immediately.

"It has been sad to see James Craig ruled out for a while with his shoulder injury.

"But it has also given us the opportunity to bring Cam in and see how he develops over the next few month."