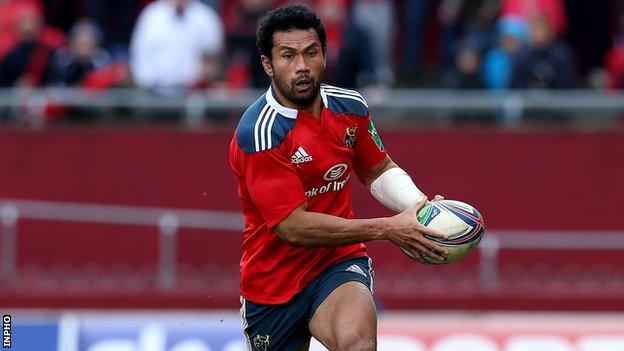 Munster have been dealt a blow with the news that former All Blacks centre Casey Laulala will leave the Irish province at the end of this season.

A statement from Munster said that the club had been unable to match terms offered by "several European clubs".

The statement did not elaborate on which club Laulala, 31, will join.

Laulala made his Munster debut in September 2012 and he made his 37 appearance for Rob Penney's side in Saturday's victory over Perpignan.

"I have loved my time with Munster and there's a lot of rugby still to be played," added the Samoan-born player.

"I want to achieve success with these guys and hope to continue to contribute in any way I can."

Munster coach Penney said that the club were "disappointed" at the news but added that they "understood" his reasons.

"I'm sure he will continue to commit himself to the goals we set out at the beginning of the season and will contribute to Munster's campaign," added the Munster coach.

Laulala made his New Zealand debut against Wales in the autumn of 2004 and won his only other cap against Ireland 18 months later.

The announcement concerning Laulala's future comes in the wake of Donnacha Ryan committing himself to the Irish province until June 2017.