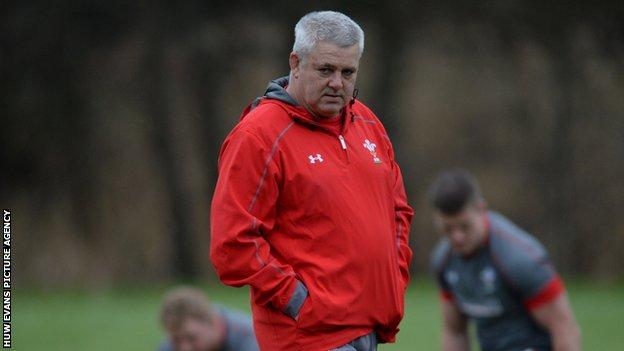 Wales coach Warren Gatland has signed a contract extension to remain in charge until after the 2019 World Cup.

Gatland said had he quit after the 2015 tournament, he would have left the job "half done".

He told BBC Radio 5 live: "There's a group of players who honestly believe they are capable of winning the World Cup in 2015… so that's hugely exciting."

He then took a sabbatical from Wales to lead the 2013 British and Irish Lions to a 2-1 series win over Australia.

Gatland said the fact that the job of coaching the All Blacks might not be available did not enter his thinking while he considered the option of remaining with Wales.

"I think that a lot of people speculated I was going to finish after 2015… but I felt like the job was sort of half done in terms of the amount of quality we have coming through. That's incredibly exciting.

"There was no thought in my process about coaching the All Blacks. I don't think about planning what I want to do - I'm a great believer in what will be, will be.

"I'm only 50 so still a really young coach so plenty of time to look at other opportunities in the future."

He also admitted that giving up the Wales role could later lead to regrets.

"A commitment for Warren Gatland to coach Wales through to a third World Cup cycle is massive on both sides. Gatland seems confident in the quality of his players no matter where they're based and doubts the long-term lure of French clubs. While he's conciliatory about relations with the regions, the media conference failed to throw any light on the current stand-off"

"There's a fear factor. I would hate to think in 10 years' time, [I'd be] sitting somewhere in the world and watching Wales play and see them beaten by 30 or 40 points.

"We have an opportunity to cement the success that we've had and hopefully put in place strategies for the future that is going to make us as successful as possible.

"That's our remit. We know with such a small playing base it's tough, but we punch massively above our weight."

In a press release WRU chief executive Roger Lewis said: "He [Gatland] has undoubtedly proved that he has the rugby expertise, the passion and the commitment to prepare and inspire our teams to play with the utmost skill and pride for the jersey.

"We now have a meticulous and professional coaching structure in place which Warren must take credit for creating.

"By signing him for a further four years we have ensured that the systems now in place will continue to develop for the future of the international game in Wales."

David Pickering, the WRU chairman added: "He [Gatland] operates in one of the toughest sporting environment and has the strength of will to accept and relish the challenge to meet the high standards the Welsh rugby public demands.

"Welsh rugby is fit for purpose both on and off the field to meet the challenges which lie ahead."