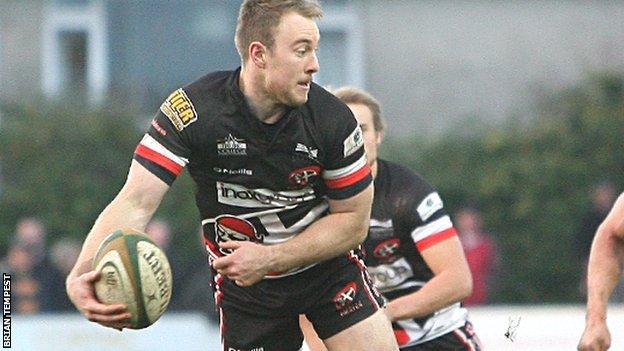 The Pirates ran in four tries and kept Jersey from scoring for the first time in nearly seven years.

"To nil Jersey at home and pick up a four-try bonus point was very satisfying for us.

"I think it was a true reflection of the game. We had dominance throughout," Davies told BBC Radio Cornwall.

"It was a complete performance in attack and defence, it was fantastic.

"We spoke all week about the fact that we'd played Jersey twice and we hadn't had an 80-minute performance.

"We defended really well and when we got the turnovers we counter-attacked and scored a couple of fantastic tries but there was real attacking intent and we could have scored more tries with a bit more patience.

"Our driving force was an 80-minute performance - I don't think there was a single facet of play that we didn't dominate."

The B&I Cup is an important competition to us.

The Pirates have been in scintillating form in the B&I Cup, which they won in 2010, with 20 points out of a possible 20 thanks to bonus-point wins in all four group games so far.

"We're very satisfied, we're the only team in the whole competition to have four wins and four bonus points," said Davies.

"We've got Ayr at home next and that will be a really tough game. They'll be confident now they've got some Glasgow boys playing for them, but they've got to come to the Mennaye Field and not many people like to come there."

He added: "The B&I Cup is an important competition to us. You can only win two - the Championship and this.

"In the B&I Cup you have to win your pool and we were determined to do that. But we still have to finish the job off and try to get the home draw in the quarter-finals and that's now the focus."