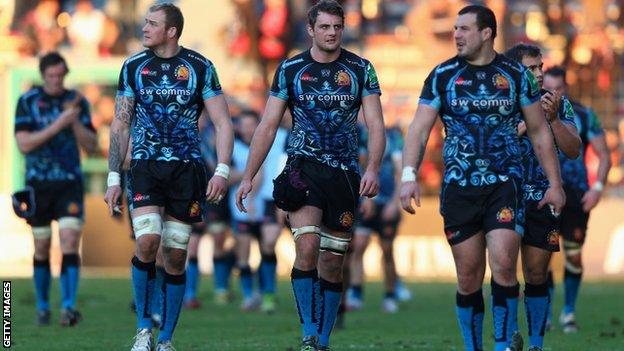 Exeter Chiefs head coach Rob Baxter hopes his team will take the lessons from their two Heineken Cup defeats by Toulon into the Premiership campaign.

A 32-20 loss to the defending champions on Saturday effectively ended Exeter's hopes of progress in their second season in Europe's elite competition.

"We lost and there's no running away from that," he told BBC Radio Devon.

"The important thing is to bring the intensity of how we've played in the last few weeks into the Premiership."

The Chiefs pushed the star-studded Toulon side close in both of their Pool Two encounters, losing 14-9 at Sandy Park last week, and Baxter said the two performances showed his team's development since last season.

They were hammered 46-12 at home and 46-3 away in the pool stage by eventual finalists Clermont last term, and eventually finished third in their group table.

"We have to keep our eye on the bigger picture and we've put in two noticeably better performances than we did against Clermont last year," he said.

"Even if you only judge it on the scoreboard, it shows we're heading in the right direction.

"Last year we came out of the Heineken Cup and did well in the Premiership and that's what we have to do again."

Baxter said his side had also taken a significant step forward in terms of the style of rugby they were producing.

"I'm the coach and I find it thrilling to watch this team play so what some of the supporters must think, I don't know," he continued.

"It feels like we've been involved in a really good game of rugby and just come up a bit short but I've said to the guys that we as coaches have to learn as well as the players.

"We've got to be in the thick of it to experience it and I know there's a couple of things we've learnt in terms of game management that we saw as coaches and that will knock us on if we play this kind of opposition again.

"I think were getting there but that's the biggest battle. And that's why Toulon decide to employ 14 or 15 internationals in their starting line-up - because those guys have been through it and can probably change a bit quicker than guys who have a bit less experience."

Baxter added: "There's so many positives I almost don't want to think about the negatives. We'll deal with that in-house and analyse the game as we always do.

"We want to keep being involved in these big games because we can feel we're getting better in them. We need to make sure that whatever happens, at the end of each Premiership season we're in the top six, and we're lined up for whatever competition is in place."