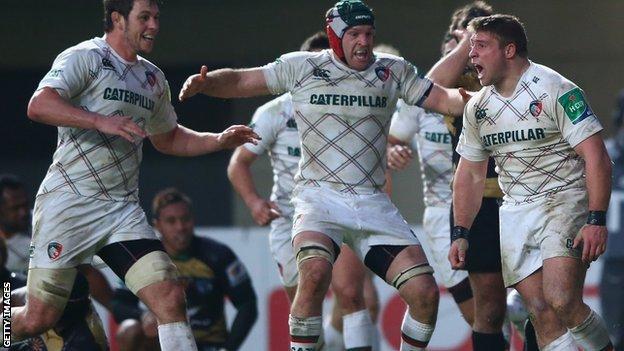 Leicester boss Richard Cockerill says his side's 14-15 win at Montpellier on Sunday has put the pressure back on Pool Five leaders Ulster.

And Cockerill believes they have set themselves up for a group-deciding meeting on 17 January at Welford Road.

"There is a home quarter-final up for grabs and that puts pressure back on Ulster," he told BBC Radio Leicester.

"They have to entertain Montpellier and we travel to Treviso next, which are not easy games, but I hope it sets up a winner-takes-all at Welford Road. At the start of the pool games that is where you want to be."

For all of the Tigers' European triumphs, having won back-to-back Heineken Cups in 2001 and 2002, the English Premiership champions have endured a lengthy drought of success across the Channel.

Cockerill praised his players for leaving the Stade Yves-du-Manoir with a milestone victory after a scoreless first half.

"It is a little bit of history for this group of players, we haven't won in France since Pat Howard's days in 2006," Cockerill said.

"It's good for those lads in there who have done it, at a really big club with lots of history they are making their own bits of history and that is really important for the modern teams.

"I'm glad after nearly eight years that we could give the fans something to cheer about."

And for that Cockerill had to thank Niki Goneva for his intelligent touch down, striding over out wide before racing closer to the posts to give Ryan Lamb an easier conversion to win the game.