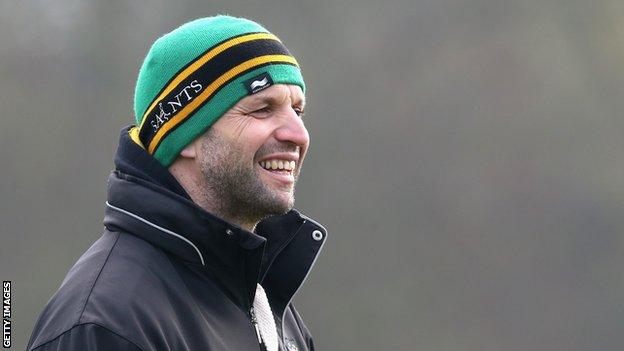 Northampton coach Jim Mallinder has said Saturday's 18-9 win at Leinster was driven by the "embarrassment" of a heavy home defeat the previous week.

Mallinder told BBC Radio Northampton: "Last week I used the word 'embarrassed' and I meant it.

"We pinpointed areas we needed to improve and we worked on that in training and I saw the difference."

The result leaves Saints second in Pool One of the Heineken Cup on nine points, and keeps hopes of qualifying for the quarter-finals alive.

"We looked at the areas where we didn't compete with them," said Mallinder.

"The breakdown was one, we made a terrible start and in our kick-chase game we were second best so we said we'd work with those.

"We went out with confidence, we started the game well and we took our opportunities, and had a good balance to our game."

Saints hooker Dylan Hartley praised his team's determination to put right the heavy defeat in front of their home fans.

"It was a horrible week, a long week," he said.

"All I wanted to do was come here and play and get it over and done with."

The 27-year-old admitted Saints have been given a wake-up call and needed to raise their game if they are to continue in the Heineken Cup this season.

Northampton are second in the Premiership but Hartley said the quality of European competition was on a higher level than some domestic opponents.

"Maybe over the last four weeks, playing a couple of LV= Cup games and against some of the lower Premiership sides, then to go straight in to a European title contender contender game I think we were a bit off the pace.

"From one to 15 we all fronted up and the contact area was the most important part of the game.

"If we carry hard in to contact we'll get over the game line, and when you're defending if you put in big hits you're going to slow their ball."