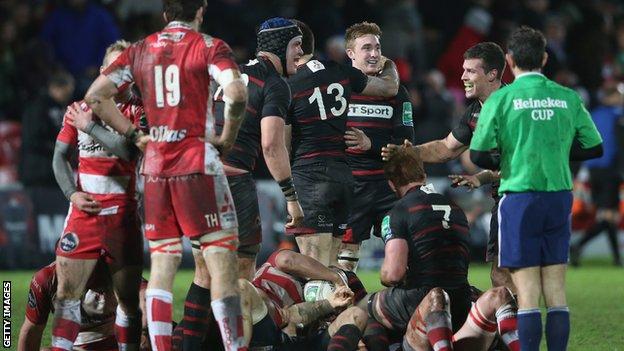 "It was a performance of character and heart," he said after Edinburgh moved up to third place in Pool 6.

"Defensively we were superb and I thought everybody played well. There wasn't anyone who didn't give a good account of themselves.

"I think we set the record straight with that performance out there," he added on the club website.

Edinburgh's gutsy display at a wet and windy Kingsholm derailed Gloucester's tournament aspirations and avenged a limp 23-12 loss at Murrayfield.

"We were determined to change things after losing the previous weekend and are pleased to at least be back in the frame in the pool," continued Solomons, who rested some of his Scotland stars for the trip south.

"The players who came in did a really good job for us.

"I left out players like Grieg Laidlaw, Dave Denton and Nick De Luca because I detected signs of both mental and physical fatigue in their performances last week.

"They had played for Scotland throughout the autumn internationals and then come into the Heineken Cup.

"I just felt that by bringing in fresh faces it would help us and, in the end, it was a win, win situation all round.

"But we have three massive domestic games against Leinster and Glasgow Warriors, home and away, to come before we get back into Europe so we're taking it a game at a time and not looking too far ahead."