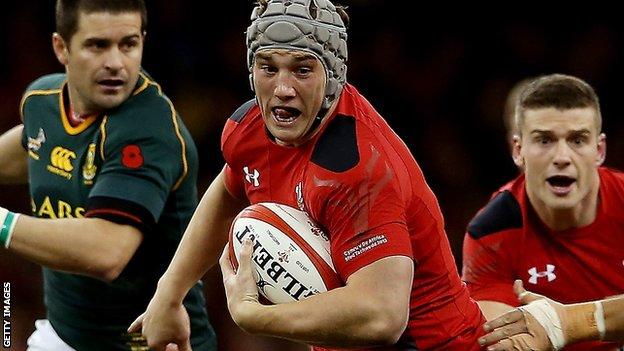 The 25-year-old, currently sidelined with injury, will join Clermont on a two-year contract next season.

Davies' current employers the Scarlets lost to the Top14 leaders in the Heineken Cup on Saturday.

"He'll still play for Wales and hopefully he'll be a better player for Wales as well," Cotter said.

Clermont, beaten finalists last season, took a significant step towards a place in the Heineken Cup last eight with a bonus point win over Scarlets.

Davies missed the game as he recovers from the pectoral injury he suffered during Wales' defeat to South Africa in opening game of November's autumn series.

A doubt for the Six Nations, Davies will leave the Welsh region at the end of the current season.

"He'll have good players with him and around him as well so hopefully it will develop him and give him another culture to live in."

The French club have also been linked with Cardiff Blues pair Leigh Halfpenny and Sam Warburton as well as Ospreys' Alun Wyn Jones.

Cotter would only say the club were not actively chasing a large number of Welsh players.

"There's some very good players in Wales and I'm sure if some of them want to leave Clermont might want to take them," Cotter added.

"But we're certainly not actively chasing a large number of Welsh players.

"I think the agents use us quite a bit just to get a bit of publicity for their players and get it out in the press. It's leverage if you like."