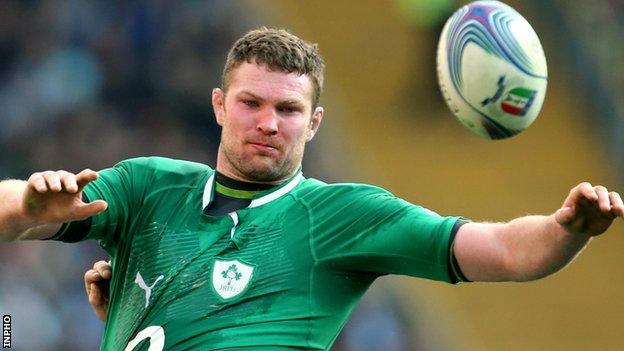 Ireland forward Donnacha Ryan has signed a new three-year contract with the Irish RFU which will tie him to Munster until June 2017.

The 30-year-old from Limerick, who can play at lock or flanker, has won 28 caps for Ireland, the first coming against Argentina in November 2008.

Ryan has scored seven tries in his 123 appearances for Munster.

"Donnacha's quality and versatility will continue to be major asset for the squad," said Munster coach Rob Penney.

Ryan was a reported target for Aviva Premiership side London Irish, who are looking to increase their links with Ireland following their takeover by a consortium headed by Irish businessman Mick Crossan.

Philip Browne, chief executive of the IRFU, is pleased Ryan has decided to stay in Ireland for the foreseeable future.

Browne said: "Donnacha has proven his worth to Irish rugby with his intelligent and high-intensity performances for both Munster and Ireland.

"The IRFU is delighted to secure his future in Ireland for the next three years."