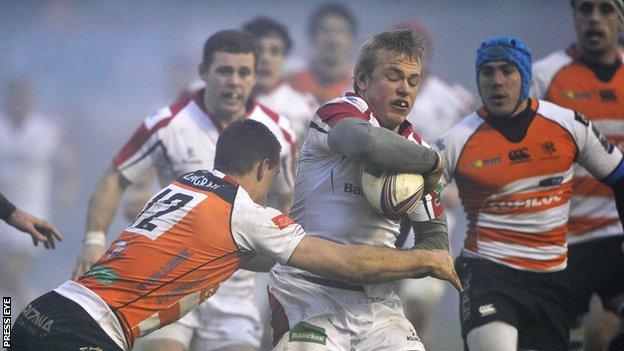 Coach Mark Anscombe believes back-to-back wins over Treviso in the Heineken Cup prove that Ulster have more strength in depth this season.

Saturday's 35-3 win in Italy means Ulster have won their opening four matches for the first time in the European competition.

"A few years ago people might have asked if we could do it without the likes of Ferris, Henry, Bowe and Best.

"To have had two good wins, shows other guys have taken their chances."

But just as pleasing for Anscombe was the fact that the Irish province again did not concede a try.

"Even when we had the game won, and they were on our goal-line, our guys fought and did not give them anything," said Anscombe.

Ulster now have three Pro12 matches before resuming their Heineken Cup quest with Montpellier at home and Leicester away.

There may be growing anticipation about an 18 January showdown with the Tigers in the final Pool 5 game at Welford Road, but Anscombe insists they must focus on more immediate matters.

"There are a lot of important matches to be played in the Pro12 before that game." said Anscombe whose side face Zebre, Munster and Leinster over the next few weeks.

"All the games we have coming up are against some of the higher quality sides in Europe and it gives us a chance to test ourselves and see how good we actually are.

"We would like to give a few guys a bit of a break without jeopardising the level of performance we expect and or the standards we need to achieve.

"We are happy with where we are in Europe. The boys have put themselves in a good position.

"Their destiny in the Heineken Cup is in their own hands and that it what you want."