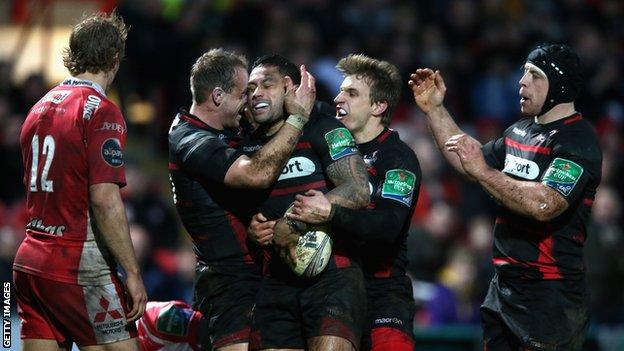 Three booming Jack Cuthbert penalties put the visitors ahead by two points at the interval, with the hosts earning a penalty try from a line-out drive.

The Irish province lead the way on 14 points while Edinburgh have eight points and are up to third, a point behind their hosts on Sunday.

Gloucester's 23-12 win at Murrayfield last week resulted in Edinburgh coach Alan Solomons asking for an improvement on a "flat" display, and his team responded with grit and determination.

The visitors opened with a patient 21-phase move but failed to make any significant ground in the face of determined tackling.

Cuthbert cracked over a penalty on 10 minutes as errors crept into the home side's game and Burns, kicking into a swirling wind, missed an opportunity to level.

Winger Jonny May was prominent for Gloucester but too many of his team-mates were not on the same page as Edinburgh profited from another penalty, with Cuthbert's long-range effort bouncing off the crossbar on its way over.

Edinburgh continued to rumble menacingly with ball in hand and the home crowd were growing increasingly frustrated with their team's poor decision-making.

However, the groans turned to cheers on 35 minutes as the Cherry and Whites pulled together a well-rehearsed line-out drive to cut through the visitors.

Some 20 metres were made, with Edinburgh's defence in disarray, and a penalty try was awarded after some desperate infringing just short of the try-line, with Burns converting.

But more sloppy play from Gloucester resulted in a penalty that Cuthbert thumped over to edge the Scots ahead again before the interval.

Matt Kvesic made a purposeful break for the home side early in the second half but he was halted five metres from the posts and lacked sufficient support.

The Edinburgh pack then folded at a scrum, allowing Burns to knock over a penalty to nudge Gloucester back in front.

The visitors responded immediately with a slick attack and, with an advantage in play, worked the ball patiently to Atiga to plunge over near the posts, with Cuthbert adding the extras.

More messy play in midfield gave Cuthbert the chance to add to his tally but his penalty effort slipped just wide.

The momentum switched again when Edinburgh prop WP Nel was sin-binned for chicanery in the scrum and a great opportunity for a home score was passed up by Rob Cook, who failed to offload to May before he was enveloped by two opponents.

A poor clearance from Grayson Hart then invited more pressure on the Edinburgh line but Gloucester could not take advantage.

Ill-discipline cost the home side dear when a five-metre line-out suddenly turned into a penalty for Edinburgh after a nasty shove from Burns sent Greig Tonks over the advertising boards.

And just as Edinburgh returned to a full complement of players, Gloucester lost Ben Morgan for a foolish kick at the ball from an offside position.

Cuthbert was left red-faced at the penalty attempt as the ball wobbled off the tee, resulting in a trundling effort that barely got off the ground, but a cheap Gloucester knock-on gave the visitors a scrum high up the pitch.

The now-depleted hosts were then pinned back as Edinburgh recycled sensibly to run the clock down before Nel powered over the line, only for the television match official to rule against the burly South African.

But Gloucester could not benefit from the reprieve and Edinburgh held on comfortably in the last few minutes.