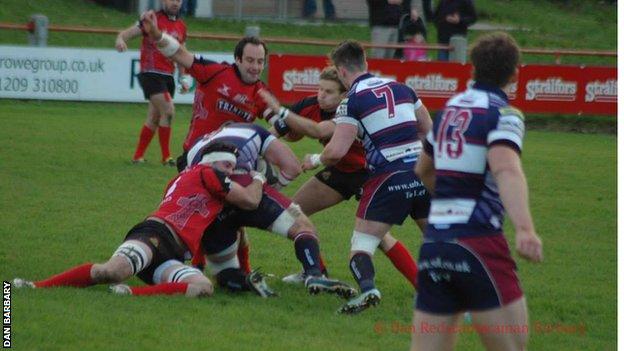 Redruth head coach Ashley Morcom says he has dealt with his teams defensive problems ahead of the clash at Clifton.

Despite a second-half comeback against Bishop's Stortford last weekend, Morcom was unhappy with the Reds' defence.

We're going to go there and make it as uncomfortable as possible.

"Tackling's a mindset, it's not really something you can coach," Morcom told BBC Radio Cornwall.

"They've got to want to tackle and, in the second half last week, they proved that they can do it. I believe we've addressed those issues."

"It's purely down to the individual," Morcom continued.

"You can coach techniques and where you should be, but if you don't want to put your head in there you're not going to make that tackle."

Redruth have not won away from home this season, whereas their hosts have won every game they have played at Cribbs Causeway.

"Looking at the results they've had of late, they're quite good at home," Morcom said.

"They're missing a few of their Bristol players so it's as good a time as any to go and turn them over.

"We're going to go there and make it as uncomfortable as possible and hopefully we can get on top of them and come away with the result."