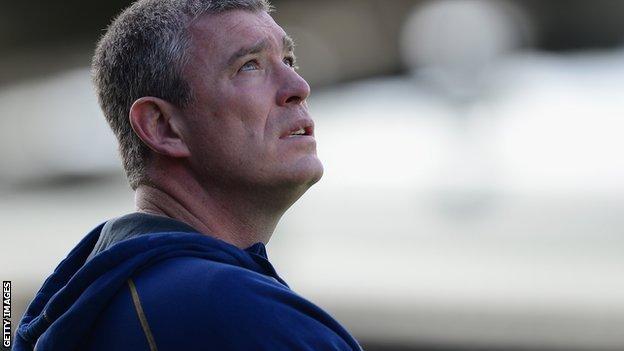 Worcester director of rugby Dean Ryan has described the travel chaos leading up to Thursday's Amlin Challenge Cup loss to Biarritz as a "shambles".

The Warriors travelled 14 hours on the day of the game after fog led to the cancellation of flights from Heathrow.

"I'm not sure if that was a Heineken Cup game we would be expected to turn out in a major event," Ryan told BBC Hereford and Worcester.

"But that is what the regulations say you have to do."

Is this the way to Biarritz?

Having had their flight out of London Heathrow cancelled on Wednesday, Warriors had hoped to catch an early morning flight to Barcelona and on to Toulouse on Thursday, but were unsuccessful in securing a booking because of the adverse weather conditions.

Instead, the first XV had to travel to Bristol from London, where they caught a flight straight to Toulouse.

Meanwhile, the management and replacements were forced to catch a later flight from London Stansted, which got them to the ground less than two hours before kick-off.

He continued: "Some of the things that have gone on the last couple of days has been a shambles. We were forced to get here, forced to get the game on.

"To be honest, Wednesday night was a bit of a shambles to solve it at midnight with athletes that hadn't eaten or slept and were going on the bus at three or four o'clock in the morning.

"I've never done anything like that - I've never had a flight cancelled and had to be in a European contest the next day. There are some things that need to looking at from the tournament."

Ryan, the rest of Worcester's management team and replacement players did not arrive at at the Parc des Sports Aguilera until less than two hours before kick-off.

The squad had been forced to split into two travelling parties after flights out of Heathrow Airport were cancelled on Wednesday, with the first XV travelling to Bristol from London to catch a flight straight to Toulouse to ensure they had a team to field against the French side.

Despite leading by ten points and playing against 14 men for much of the second half, Worcester lost 33-25 - although Ryan was still quick to praise the effort of his players.

"Coping with 14 hours on the road with three hours sleep is pretty impressive and I thought the guys handled themselves fantastically over the two days," he said.

"We had to get here and make sure we got our bit right and I thought we did that - we did a pretty good job, even if we did not get the win.

"This tournament is about us growing a little bit, about the youngsters getting game time. They will be better for it."