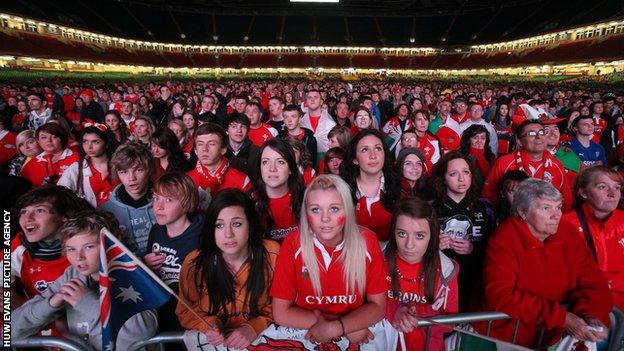 Supporters of the four Welsh regions are frustrated by the row between the Welsh Rugby Union and Regions.

The WRU and the regions are in dispute over funding, the exodus of Welsh players and an Anglo-Welsh league.

"It's hugely disappointing and very, very frustrating and enough is enough."

Representatives from Welsh rugby's four regions - the Scarlets, the Ospreys, the Cardiff Blues and the Newport Gwent Dragons - met the WRU on Wednesday in an attempt to resolve differences and to discuss the future of the domestic game.

They talked about funding, the exodus of Welsh players and an Anglo-Welsh league, but no deal was agreed and further talks are planned.

A WRU statement said it was "hopeful" the participation agreement between the parties would be signed before the 31 December deadline.

"We continue to try and take it forward in the best interests of Welsh rugby."

BBC Wales Sport understands the Supporters groups have been invited to a meeting with the WRU on Monday.

"Over the last couple of weeks we've been very vocal," said Hopkins. "And that's not just us as a supporters club, but supporters across Wales have been vocal, about how frustrated they are.

"About either the lack of progress, the lack information and actually the fact that the Welsh Rugby Union in particular, are ignoring what supporters like us feel and think about the situation that's ongoing."

She claimed that fans from the four regions had a request to highlight their concerns to the WRU turned down last Spring and told BBC Wales Sport why they had decided to issue a statement.

"We felt that now it's got to the stage where we had to have our voices heard," she said.

"For us as a group of supporters it's also about where we watch our rugby, where our kids are going to watch it and how we spend our money as well.

"It's not just the WRU investing in our rugby and our clubs and mini rugby - we are as well and have been for years.

"What we are looking for primarily is making sure that the regions are maintained in their current form."

The WRU have been asked for a comment but have not yet responded.

Following their meeting with the regions on Wednesday the WRU released a statement which said: "At this key moment for rugby in Wales the WRU continues to work hard in the best interests of Welsh rugby as a whole.

"It would be unfair on the fans, the players and all of Welsh rugby to make any further speculative comment at this time.

"However, the WRU remains hopeful that the Regions will decide to continue with the Participation Agreement by the deadline of 31st December 2013."