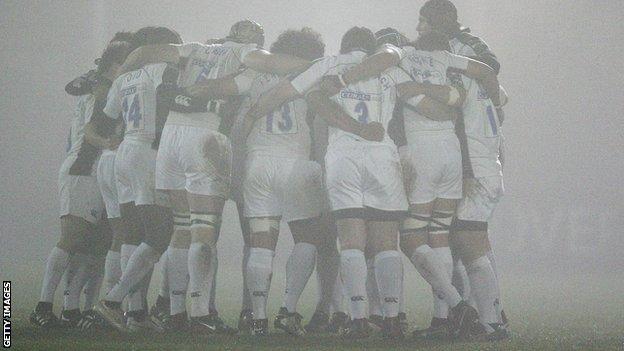 Worcester's preparations for Thursday's Challenge Cup game in Biarritz have been thrown into disarray by dense fog which has led to the cancellation of flights from London's Heathrow Airport.

The game in southern France is scheduled to kick off at 19:45 GMT.

But the team are not likely to arrive at the Parc des Sports Aguilera until around three hours before kick-off.

The squad has been forced to split into two travelling parties and the first XV are expected to arrive by 16:00 GMT.

Warriors had hoped to catch an early morning flight from Heathrow to Barcelona and on to Toulouse on Thursday, but were unsuccessful in securing a booking because of the adverse weather conditions.

The first XV have therefore resorted to travelling to Bristol from London to catch a flight straight to Toulouse as they try to ensure they at least have a team to field against the French side.

Worcester's management team and replacement players are not anticipated to arrive at the ground until two hours later as they fly from London's Stansted Airport to Bergerac where they then face a bus journey of more than three hours.

While the Premiership side have struggled to get playing staff to Biarritz by air, their kit man did the journey by road and arrived as scheduled on Wednesday.

Worcester are bottom of Pool One after three games, while Biarritz are second.